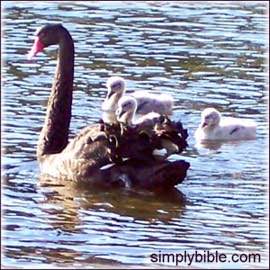 Baby Baptism
—The question of innocence

In this lesson we examine whether infants should be baptized.

We know that baptism is "for the forgiveness of sins" (Acts 2:38). So if an infant has sins, then an infant needs baptism. People baptize babies because they believe the baby was born sinful. They believe that Adam's "original sin" is passed on to all human beings by procreation.

People who believe that babies are born innocent, do not baptize them. So let us think about innocence first of all.

1 The Question of Innocence

Jesus recognised the state of innocence in little children. "The kingdom of God belongs to such as these" (Luke 18:15-17). Little children are not damned but in a state of grace.

Nobody is born a sinner, nor is sin inherited from one's fathers. Nobody is condemned before having grown up and committed personal sin. "The soul who sins shall die" (Ezekiel 18:2-4).

We are all born perfect, because God created our inmost being (Psalms 139:13). The "spirit returns to God who gave it" (Ecclesiastes 12:7).

Some will try to cancel out these facts with David's statement, "I was brought forth in iniquity... In sin did my mother conceive me" (Psalms 51:5). However this must be interpreted so as not to contradict the other scriptures.

David is not saying he was sinful as a child in the womb, nor is he saying his mother was sinful to conceive him. He is just saying that through conception he was brought into a sinful world. The terms "in iniquity... in sin" simply mean, in this poem, "in an environment of sin".

David also says to God, "You wove me in my mother's womb..." (Psalms 139:13-16). Here David attributes procreation to the Creator. God brought David (and every other child) into being in the womb. God can only weave something good. He cannot weave something corrupted. Therefore the child in the womb or new born is in a state of innocence (note Acts 7:20).

A state of grace

The state of innocence is a state of grace, not a state of merit. Nobody except Jesus can claim eternal life by personal merit.

An infant has done no evil by which to be condemned. Yet neither has an infant done righteous works by which to claim merit.

2 The question of nature

Some texts seem to teach that human nature is corrupt, and every human being inherits this corruption. Peter speaks of redemption "from your futile conduct handed down from your fathers" (1Peter 1:18). Paul says, "You were by nature children of wrath, even as the rest" (Ephesians 2:3).

"The natural man does not receive the things of the Spirit of God... nor can he know them because they are spiritually discerned" (1Corinthians 2:14).

However the "nature" in these verses is not inherited by procreation, but acquired by experience in a sinful society. "Nature" refers to the world and environment one grows up in, the traditions and culture one acquires, and the things one absorbs.

One can live in a society whose ways are futile and wicked. One can learn and accept those ways and become darkened by them. Culture may influence a person's thinking and behaviour enormously. Yet one can turn to a belief system based on the ways of the Lord, being re-educated so that a new nature supplants the old nature (Romans 6:4-6).

Paul believed that human "nature" is as much capable of upholding God's law as it is capable of perverting and rejecting it. The people in Romans 1:25-26 had grown up in a world where the knowledge of God was clear. They had gone "against nature", having suppressed and perverted what, by nature, was theirs.

What people do by nature

Romans 2:14 says people "do by nature the things written in the law". Their lives and thoughts were obviously influenced by God's law which was present in their environment. What's more, they did not suppress or pervert that truth but chose instead to live by it.

An infant has not yet acquired such a nature, having not yet been taught right from wrong. Therefore an infant cannot to do either right or wrong "by nature".

We have considered the state of innocence and the question of nature. Finally, we will look at who is a proper candidate for baptism.

3 Who should be baptized?

Should babies be baptized therefore? Infants do not understand enough to believe, nor do they have sins to repent of. First they must grow and learn. Then they will know how to believe and repent.

The Bible teaches six steps of obedience to Jesus, including baptism. Because an infant cannot yet take the other five steps, an infant is in a state of grace and not ready for baptism, or required to be baptized.

—The words of Jesus in the gospels, and Paul’s agreement in Romans, about what people should do to receive grace. Touch any yellow heading to go to a lesson on the subject.

¶“7So then, everyone who hears these words of mine, and does them, will be like a wise man who built his house on the rock.” (Matthew 7:24).

¶“16For God so loved the world, that he gave his one unique Son —so that whoever believes on him should not perish, but instead have eternal life” (John 3:16 ).

¶“16For I am not ashamed of the gospel of Christ, for it is the power of God for salvation to all who believe, to the Jew first and also to the Greek. 17For in the gospel the righteousness of God is revealed from faith to faith, as it is written, 'The righteous shall live by faith.'” (Romans 1:16-17).

¶“31And Jesus answered them, 'Those who are well have no need of a physician, but those who are sick need one. 32I came to call not the righteous but sinners to repentance.'” (Luke 5:31-32).

¶“4Do you take for granted the riches of God’s kindness and forbearance and patience, not knowing that God’s kindness is meant to lead you to repentance? 5But, because of your hard and impenitent heart, you are storing up wrath for yourself when the day of wrath comes, and God’s righteous judgment will be revealed.” (Romans 2:4-5).

5. Being baptised into Christ’s death

¶“15Jesus then said to his disciples, 'Go into all the world and preach the gospel to all creation. 16Anyone who believes and is immersed shall be saved. Anyone who does not so believe will be condemned'” (Mark 16:15-16).

¶“3Aren't you aware that all of us who were immersed into Christ Jesus were immersed into his death? 4Thus we were buried with him by immersion into death. And consequently, just as Christ was raised from the dead by the glory of the Father, we too are able to walk in newness of life.” (Romans 6:3-4).

¶“11Do not slacken in your zeal. Rather, be fervent in spirit as you serve the Lord. 12Rejoice in hope, be patient in tribulation, be constant in prayer.” (Romans 12:11-12).