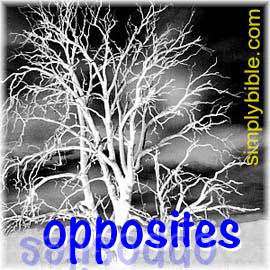 Spirit and Matter
— A Mysterious Connection

Many folk today do not believe in a spiritual reality within the universe and beyond it. They believe in a wholly material universe. They credit human beings with nothing more than physical existence. They see humans as animals —superior as animals go, but animals and nothing more.

1 Matter is Bound by Time, and Spirit by Eternity

One feature of matter is its connection to time. Time is one of the mysteries of the universe. Time is not well understood, not even by modern science.

We use expressions such as “the passage of time” and “time goes by” and “time marches on” —as though we are watching it go. However we are chained to time and perforce we march with it, unable to disengage from it. The Bible teaches that this will not always be so.

In the Bible, the passing of time is usually called “days”. For example, "All the days of Methuselah were nine hundred and sixty nine years" (Genesis 5:25).

The Bible often speaks about “The Last Days”. For example the book of Hebrews begins by saying, "In these last days God has spoken to us through his Son" (Hebrews 1:1). This term seems to indicate that there will be no further passage of time once these “Last Days” come to an end. The last day of all the last days will be the end of time as we know it.

The Bible teaches that, on the last day, earth, sky, and sea will pass away.

If heaven and earth pass away, so does our connection with time. We have lived with the daily rising and setting of the sun and the yearly cycle of the seasons. On the last day that will end. We will find ourselves transported to either a new heavens and a new earth or exile in outer darkness. There will be a new kind of time. It is called eternity and it's a greater mystery than time itself.

So long as the human spirit resides in an earthly tabernacle, it is bound to follow time’s passage. But when that time is complete, the spirit is no longer in thrall of time.

2 Spirit and Matter are Mysteriously Connected

Paul says, "I declare to you, brothers, that flesh and blood cannot inherit the kingdom of God, nor does the perishable inherit the imperishable. Now listen, I tell you a mystery: We will not all sleep [in physical death], but we will all be changed. This will happen instantly, in the twinkling of an eye, at the last trumpet. For the trumpet will sound, the dead will be raised imperishable, and we will be changed. For the perishable must be clothed with the imperishable, and the mortal with immortality (1Corinthians 15:50-51).

Paul understands that human beings are not merely physical flesh and blood creatures. They are spiritual beings and their physical bodies, even if long dead, can be changed into spiritual bodies "eternal in the heavens" (2Corinthians 5:1). Christ "will transform our lowly body to conform with his glorious body" (Philippians 3:20-21).

The Connection in All Creation

We have seen that the human body can be exchanged for one of spiritual, heavenly, and eternal substance. But much more than that, the entire creation will likewise be exchanged for a spiritual "new heavens and a new earth in which righteousness dwells" (2Peter 3:13). This includes a vast holy and heavenly city which is ever new (Revelation 21:1-5).

Paul says, "The creation itself will be set free from its bondage to corruption and obtain the freedom of the glory of the children of God. For we know that the whole creation has been groaning together in the pains of childbirth until now. And not only the creation, but we ourselves, who have the firstfruits of the Spirit, groan inwardly as we wait eagerly for adoption as sons, the redemption of our bodies" (Romans 8:19-25 ESV).

Paul seems to believe that there is a connection between this present material creation and the spiritual and heavenly one that is to come. He speaks of the change of the human body from a physical body to a spiritual body. He likens it to a humble seed planted, which dies, yet produces a beautiful plant in its place (1Corinthians 15:35-38,44). Here in Romans 8, he appears to regard this as true for all creation. The physical creation will give birth to a new creation, the new heavens and new earth.

What is the Connection Between Spirit and Matter?

In the beginning "God saw everything he had made, and behold it was very good" (Genesis 1:31). This goodness was the result of God uttering his word. "By faith we understand that the worlds were prepared by the word of God" (Hebrews 11:3) and "the word of God endures forever" (Isaiah 40:8).

This goodness, seen by God in his creation, will survive the bondage to corruption that the creation has suffered over time beginning with the fall. The Creator’s enduring word, in creation and in revelation, is incorruptible and eternal. It is pure goodness and connects the physical creation, with the new spiritual, heavenly, and eternal world to come on a future day.

The phrase,"Then God said..." (Genesis 1:3 etc), is important because it shows creation was formed by the word of God. He spoke, and it was so.

What creates both worlds also connects them. By that good word of God, we occupy the old world now. By that same good word, we will see the new world on the last day when the creation of God will be set free from its corruption, and its long march through time.

3 Both Matter and Spirit Originate from God

¶“6 Seek the LORD while he may be found. Call on him while he is near. 7 Let the wicked forsake their way. Let the unrighteous forsake their thoughts. Let them turn back to the LORD so he may have compassion on them. Let them return to our God, for he will abundantly pardon.” (Isaiah 55:6-7).

¶“10The rain and the snow come down from heaven. They do not return there without watering the earth to make it produce and sprout. They give seed to the sower and bread to the eater. 11 So shall my word be. It goes out from my mouth and it shall not return to me empty. It shall accomplish my purpose and succeed in the thing for which I sent it.” (Isaiah 55:10-11).

That passage shows that there is a purpose in God’s mind, and he utters his word to accomplish that high purpose. God’s thoughts are higher than yours. In fact you, body and spirit, originated in his mind. That is why you should return to him and live, body and spirit, by his word.

"Remember your Creator in the days of your youth, before the silver cord is loosed... and the [body of] dust returns to the earth as it was, and the spirit returns to God who gave it... Fear God and keep his commandments, for this is everything to humanity." (Ecclesiastes 12:6-7,13)