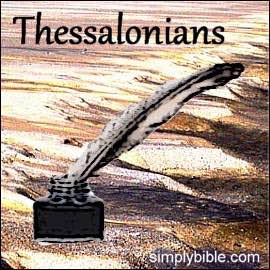 In this second lesson from Second Thessalonians, we look at the part of chapter one that we skipped over in the first lesson. Our passage for study is 2Thessalonians 1:6-10. (I've included verse 5 in the reading).

¶“5Your pain is evidence of God’s righteous judgment. In the end, you will be counted worthy of the Kingdom of God for which you suffer. 6God is just: He will pay back trouble to those who trouble you. 7He will give relief to you and to us as well. This will happen when the Lord Jesus is revealed from heaven in blazing fire with his powerful angels.” (2Thessalonians 1:5-7).

¶“8The Lord Jesus will punish those who do not know him, and do not obey his gospel. 9They will be punished with everlasting destruction and shut out from the presence of the Lord and from the glory of his might. 10This will happen on the day he comes to be glorified in his holy people and to be marveled at among all those who have believed. This includes you, because you believed our testimony to you” (2Thessalonians 1:8-10).

In the first lesson, we considered seven goals in grace. Now we look at the flip side of that, seven fears in wrath. Paul is very aware that, as well as the grace and mercy of God, there is the wrath and retribution of God.

1 A righteous thing with God

Everything that God ever thinks, speaks, or does, is "a righteous [or just] thing with God" and we had better respect anything that God regards as righteous. The word "righteous" carries with it more than merely being right. It means that the thing is justified and in order. Even more than that, the thing ought to be done for the sake of justice.

Our justice system in Australia is very good, yet a summons to appear in court before a judge is rather scary. You are forced to tell the truth, and to be judged according to the law. How much more fearful a thing it is to stand before Christ and be judged (2Timothy 4:1). It is going to happen, and whatever the outcome it will be "a righteous thing with God".

Some people seem to presume that they can negotiate with God, and get him to respect their idea of a righteous thing. However it is we, the people, who need to hear what God regards as a righteosus thing, and give heed to it in the fear of God.

2 Affliction to those who afflict

Next we notice that one particular righteous thing with God is to take revenge on the wicked and to afflict those who have persecuted his people (2Thessalonians 1:6). This retribution from God is something to be terribly feared. Christians are told, "Never take your own revenge, beloved, but leave room for the wrath of God, for it is written, 'Vengeance is mine, I will repay, says the Lord'" (Romans 12:19).

The Hebrew writer quotes that same Old Testament passage "Vengeance is mine, I will repay, says the Lord"(Deuteronomy 32:35) and then, in case we have missed the point, he says, "It is a terrifying thing to fall into the hands of the living God" (Hebrews 10:30-31). James warns, "Judgment will be merciless to one who has shown no mercy" (James 2:13).

Unseen by anyone on earth, there is a great preparation being made in heaven for the end of our world at the second coming of Christ. It is hard to think of anything more fearful and terrible than the end of the world. Peter describes this sudden fiery destruction of the world (2Peter 3:9-14).

As far as we know, angels are the most superior beings in the universe except of course for God. We read in the Bible of mighty warrior angels. We know for example of "Michael the great prince" who stood guard over the exiles in Daniel's time (Daniel 12:1). Jesus, when he was about to be crucified, chose not to call upon these warriors to save him, though he could have commanded more than twelve legions (Matthew 26:53). At his second coming, however, the mighty angels will come in their legions to gather in the saints and to make war on the wicked. No human army or weapon will be of any use against them.

Moving on now to verse eight of our study passage (2Thessalonians 1:6-10), we think about the awful situation on judgment day of "those who don’t know God, and who do not obey the gospel of our Lord Jesus," (2Thessalonians 1:8)

Paul wrote to the Galatians, "You did not know God...but now you have come to know God, or rather to be known by God" (Galatians 4:8-9). There is nothing more important than to know God and be known by him. "'Abraham believed God, and it was reckoned to him as righteousness' and he was called the friend of God" (James 2:23). If we are not friends of God and known thus to him, then we shall be reckoned to be among his enemies, and that is greatly to be feared.

Could any penalty be worse? The Lord describes this destruction as "outer darkness" (Matthew 8:11-12). To be cast away from the light of Heaven and from the love of God is something to most awfully fear.

7 The face of the Lord

No one sees the face of the Lord at the present time, but one day "every eye shall see him as he is" (1John 3:2, Revelation 1:7). For Christians this will be a wondrous occasion when Christ will be "admired among all those who have believed" (2Thessalonians 1:10). However it will be a terrible thing for those who have not known Jesus. "The face of the Lord is against those who do evil" (1Peter 3:12). and even to just imagine it, sends a deep chill to the bottom of your soul. Will it not be infinitely worse when it really happens?

In one of the visions given to John, he saw the face of an angel "like the sun" (Revelation 10:1). When Moses came down from the mountain, "the sons of Israel could not stand to look at the face of Moses, because of the glory of his face" (2Corinthians 3:7). How much more bright and glorious will be the face of Christ?

Note: The word "face" is a literal rendering of the Greek προσωπον, (prosoopon), which is sometimes used metaphorically for "presence"