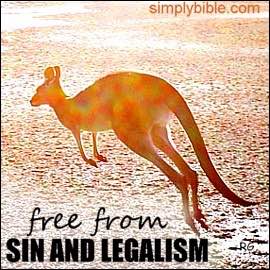 To some people, the idea of sin is silly. People laugh and boast about their sinful deeds. They don't realise the serious consequences of sin. But sin is no joke to God. In the Bible, the Holy Spirit convicts us of the gravity of our sins.

Other people seem to take sin seriously, yet fail to properly understand the problem of sin and how God solves it. They are known as "legalists".

Legalism is an attempt to address sin by imposing burdensome regulations, punishments, and guilt. Those who reject that path are viewed as morally loose and making light of sin.

What God Names as Sin

In the following passages you will find lists of things which God views as sin. For example...

“...Do not be deceived: neither the sexually immoral, nor idolaters, nor adulterers, nor men who practice homosexuality, nor thieves, nor the greedy, nor drunkards, nor revilers, nor swindlers will inherit the kingdom of God. ”
(1Corinthians 6:9-10 ESV).

“...understanding this, that the law is not laid down for the just but for the lawless and disobedient, for the ungodly and sinners, for the unholy and profane, for those who strike their fathers and mothers, for murderers, the sexually immoral, men who practice homosexuality, enslavers, liars, perjurers, and whatever else is contrary to sound doctrine”
(1Timothy 1:9-10 ESV).

“Outside [the city of God] are the dogs and sorcerers and the sexually immoral and murderers and idolaters, and everyone who loves and practices falsehood.”
(Revelation 21:8 ESV).

“But as for the cowardly, the faithless, the detestable, as for murderers, the sexually immoral, sorcerers, idolaters, and all liars, their portion will be in the lake that burns with fire...”
(Revelation 22:15 ESV).

Whilst those verses don't list absolutely every sin, they don't merely scratch the surface either. They show us clearly and comprehensively what God regards as sin. These are abominations to God and we must take them seriously. These lists include such things as...

Unlike God, some people delight in minute detail, and obscure points of law. The imaginary "sins" which they invent should not be taken seriously.

Can you find fault with the following statement? “When Jesus died on the cross, he made it possible for us to have our sins forgiven, so now sin has ceased to be a serious problem.”

•Firstly, we take sin seriously because we understand that God hates sin.

Would you want that person as your friend? No way, nor would God. These things manifestly deserve God's condemnation as "sins" and deserve to be treated seriously.

If God hates sin, then it must indeed be serious. Moreover, what God hates Satan delights in. Those who practise sin please and serve the Devil (1John 3:7-10, 2Thessalonians 2:7-12).

•Secondly, we take sin seriously because of the consequences of sin.

The wages of sin is everlasting death (Romans 6:23). Jesus will say in judgment: "Depart from me you cursed into everlasting fire" (Matthew 25:41,46). Nobody will ever say anything more serious than that.

Consider the enormous number to whom Jesus will utter those words (Romans 3:9,23 5:12, 1John 5:19). This death toll is terrible, as serious as anything can be.

•Thirdly, we take sin seriously because it caused the death of Jesus.

Fortunately God has made a way by which anyone can escape eternal death. One might say, "Oh good! That makes sin a lot less serious, doesn't it!" But think!

God had to give his unique and beloved Son to die cruelly upon the cross and to shed his blood so that we should not perish (John 3:16). The Just for the unjust had to humble himself and lay down his life (1Peter 3:18 Philippians 2:5-8).

If we will behold the Lamb of God being led to the slaughter, surely we will see the seriousness of sin (Isaiah 53:3-6).