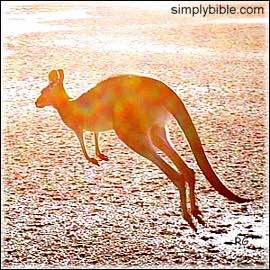 In this lesson we study the second main section of Paul’s letter, Galatians 3:6 to 4:9.

Paul makes enlightening comparisons between being in Christ and being under the law. He presents three powerful contrasts or choices between the gospel and the law, to show how superior the gospel is, and how foolish it would be to go back to the law. Paul issues strong challenges the churches to choose the superior way.

The three contrasts or choices are as follows:

¶“6'Abraham believed God, and it was counted to him as righteousness.' 7So you should know that people of faith are the sons of Abraham. 8The Scripture foresaw that God would justify the Gentiles by faith. It records the gospel preached beforehand to Abraham: 'In you all the nations shall be blessed.' 9So people of faith are blessed with Abraham the believer.” (Galatians 3:6-9)

¶“10All who rely on works of law are under a curse. As it is written, 'Everyone is cursed who fails to abide by all things the Book of the Law commands to be done.' 11Now it is evident that no one is justified before God by the law. Instead, 'The righteous shall live by faith.' 12But the law is not of faith. Rather, 'The one who does the works shall live by them.'”(Galatians 3:10-12)

¶“13Christ redeemed us from the curse of the law by becoming a curse for us. As it is written, 'Cursed is everyone who is hanged on a tree.' 14He did this so the blessing of Abraham would come to the Gentiles in Christ Jesus. He wanted us to receive the promise of the Spirit through faith.” (Galatians 3:13-14)

The blessing of Abraham was that he was "justified" which means "counted as righteous". This of course meant that he was eligible for eternal life. Now this happened without him ever having to keep the law of Moses, since Abraham lived centuries before Moses.

Abraham was "justified" not because he kept God’s law perfectly, but because he believed God’s promises to him —in other words he had faith. The most important promise was about the "seed" who was Christ. So Abraham had faith in Christ. That’s why he was blessed.

By sharing Abraham’s faith, and by no other means, everyone in the world can share his blessing. That is the power of the promise God made to Abraham.

The curse of the law. The law of Moses, on the other hand, produced not a blessing but a curse. Paul refers to Deuteronomy 27:26 and Leviticus 18:5.

The law says that those who keep it will live, those who don't will be cursed. Thus, under the law, eternal life or eternal death depend on whether one has kept or broken that law.

The problem here is that if you break just one commandment, you cannot claim to have kept the law. You have broken the law. James makes this point too (James 2:10).

Because nobody kept all the things written in the law, everyone was cursed by it! It could only impart life to one who kept it perfectly in all points. So in effect it imparted only death.

Paul is not saying that people under the law had no means of justification and eternal life. He points out that the principle has always been true that "the just shall live by faith" (Habakkuk 2:4).

Christ became a curse to bring about redemption. Christ, Paul says, redeemed us from the curse of the law, and he did so by becoming a curse for us.

NOTE: Christ became a curse in our stead, not by himself breaking the law of God, but by being hung on a tree (the cross). He did not come under the Deut 27:26 curse, but under the Deut 21:23 curse, namely "cursed is he who hangs upon a tree". The blessing of Abraham (and of anyone else who shares his faith) came from this curse —the crucifixion of his descendant Jesus Christ.

To go back to the law would be "foolish" for the Galatians, because it would bring them under the curse of the law, and lose them the blessing in Christ who became a curse in their stead.

¶“ 15Brethren, I say that even in human affairs nobody annuls or adds to a man-made covenant once it has been ratified. 16Now the promises were made to Abraham and to his seed. It does not say, 'And to seeds' as though it meant the many. It refers to one alone, 'And to your seed,' meaning Christ. 17I say this: the law, which came 430 years afterward, does not annul a covenant previously ratified by God. The law does not void the promise [to Abraham]. 18For if the inheritance comes by the law, it no longer comes by promise! But God gave it to Abraham by a promise” (Galatians 3:15-18)

¶“19So what was the law for? It was added because of transgressions, until the seed should come to whom the promise was made. The law was put in place through angels by a mediator. 20Now a mediator implies more than one, but God is one. 21 Am I saying that God’s law is contrary to God’s promises? Certainly not! For if a life-giving law [of faith] had been given, then righteousness would indeed be gained by the law” (Galatians 3:19-21).

¶“22 But the Scripture imprisoned everything under sin. So the promise by faith in Jesus Christ is given to believers. 23Before faith came, we were held prisoners under the law. We were imprisoned until the coming faith would be revealed. 24So the law was our schoolmaster until Christ came, so we could be justified by faith. 25But now that faith has come, we are no longer under a schoolmaster” (Galatians 3:22-25).

The promise God made through Abraham came long before the Law was given through Moses. The law of Moses did not set aside or change the earlier promise. The promise would be fulfilled in one man, the Seed or descendant (singular) of Abraham.

The promised seed, in other words, was not the multitude of Abraham’s descendants (seeds plural), not even the Jewish nation to whom the Law was given, but only one descendant (seed singular). This one was Christ.

Paul makes an important distinction between the law of Moses and the promise to Abraham. It revolves around the question of mediation —that is, the differing manner in which the law and the promise were mediated.

In the case of the law, angels and a priesthood acted as mediators between God and the people.

The outcome of the dispensation of law depended upon the performance of two parties: God who gave the law, and the people who tried to keep it. Since the performance of the second party was imperfect, the law produced condemnation for them instead of justification. It "imprisoned" all under sin.

The earlier promise however, was "of one" —of God alone. Because it came unilaterally from God and its fulfillment did not depend on the perfect performance of the people.

The mediator of the promise was God himself in the person of Jesus Christ the promised seed who came from God and was God. What God had promised he was able also to perform (Romans 4:21).

The outcome of a dispensation of promise depended only on God’s performance. The promise depended upon the birth, death, resurrection, ascension, intercession, and second coming of Christ. People who put their faith and trust in this, and not in their own performance, will be justified, not condemned.

This does not mean of course that they can perform little or nothing. They must make their best performance. Salvation is conditional upon that. But they do not trust or have faith in their own obedience, but rather in the One they obey.

The promise and the law are not in opposition and contradiction to each other, however. If people could have justified themselves by keeping the law perfectly, then they could have got eternal life by the law. That would have made the promise of no effect. But because the law condemned them, it taught them their need of the promised Christ. The law therefore reinforced the promise and the faith based upon it.

¶“26You are all sons of God, through faith in Christ Jesus. 27For as many of you as were baptized into Christ have put on Christ. 28There is neither Jew nor Greek, slave nor free, male nor female. You are all one in Christ Jesus. 29And if you belong to Christ, then you are Abraham’s seed —heirs according to promise” (Galatians 3:26-29).

¶“1I mean that the heir, as long as he is a child, is no different from a slave. Of course he is the owner of everything, 2but he is under schoolmasters and managers until the date set by his father. 3In the same way, we also were once children enslaved to the worldly elements. 4But in the fullness of time God sent forth his Son, born of woman, born under the law. 5His Son was to redeem those who were under the law, so that we might receive adoption as sons. 6And because you are sons, God has sent the Spirit of his Son into your hearts, crying, 'Abba! Father!' 7So you are no longer a slave, but a son, and if a son, then an heir through God” (Galatians 4:1-7).

¶“8Formerly, when you did not know God, you were slaves of false gods that don't have God’s nature. 9But now you have come to know God, or rather to be known by God. So how can you turn back again to the weak and worthless worldy elements? Do you want to be their slaves once more?” (Galatians 4:8-9).

Throughout history, people have become sons and heirs of God through faith in Christ. This was true even before the first coming of Christ. Abraham, for example, was justified by that faith (an obedient faith of course, James 2:21-24). Even under the law of Moses, people were justified by faith and not by the law.

There has never been any other way to receive God’s blessing —the only way is the way that Abraham followed: faith in God’s promise concerning Christ.

If we would be sons and heirs of God, according to the promise, we must share Abraham’s faith in Christ. In that way we become, spiritually speaking, "Abraham’s seed" or offspring, and we share his blessing.

The alternative is enslavement and condemnation. Before Christ came, the Jews were slaves under the law waiting for their coming of age. The Gentiles were also slaves —their enslavement was to false gods. The only way both Jew and Gentile could escape was to have faith in Christ.

In the light of these facts, the respective former positions of Jew and Gentile become indistinct. When adopted as God’s true sons, we lose sight of the distinction between Jew and Gentile. There is no difference really. All become one in Christ. This is especially true now that Christ has come and the world has entered a new age of faith fully revealed.

So Paul has challenged the Galatians by asking three questions. Will you lose your blessing for a curse? Will you exchange your promise that cannot fail for a law you cannot keep? Will you renounce your sonship and go back to slavery? These ideas have application to us too if we think to leave the Christian way and go back to our old way of life, for whether we were under the law of Moses or not, we still lived under a curse. Be challenged to make your choice today.