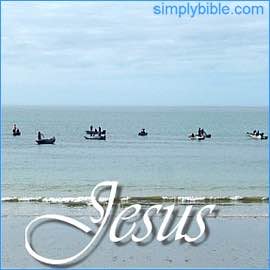 What Happened to Jesus?
—After his resurrection

The gospel’s core message is that "Christ died for our sins according to the scriptures; and he was buried; and he rose again the third day... seen by [many]" (see 1Corinthians 15:1-8).

There are questions, however, about the nature and authority of Christ when he was seen resurrected, about his ascension to heaven and his accession to the throne of Heaven.

1 What Happened to His Body of Flesh?

Some say that Christ’s resurrected body was not a fleshly body. They cite the fact that Jesus walked through shut doors (John 20:26). However, on that occasion Jesus showed Thomas the wounds in his flesh.

"Jesus said to Thomas, 'Reach your finger here, and look at my hands. Reach out your hand put it into my side. Do not be unbelieving but believing.' Thomas answered, 'My Lord and my God!'" (John 20:27-28).

If Jesus’s resurrected body was no longer flesh, it could not show the real fleshly wounds. Thomas was convinced because he saw and touched Jesus’s fleshly body —not a spiritual imitation.

When Jesus raised Lazarus "He who had died came out bound hand foot [and face] with graveclothes. And Jesus said, 'Set him free'" (John 11:43-44).

Like Lazarus, Jesus was resurrected in his fleshly body that had been in his graveclothes. He was not in a ghostly or spiritual body.

When Jesus showed himself to his disciples, he said, "Look at my hands and my feet. It is I myself! Touch me, and see. For a spirit does not have flesh and bones as you see I have" (Luke 24:39).

What happened to Christ’s fleshly body?

Paul believed that fleshly bodies will be "changed in a moment, in a twinkling of an eye, at the last trumpet..." (1Corinthians 15:51-52). At this change, the mortal body becomes immortal and glorified —an eternal body.

"Christ will transform our lowly body, that it may be conformed to his glorious body. He will do this by the power that even enables him to subdue all things to himself" (Philippians 3:21).

Jesus is said to be "the forerunner who has entered [heaven] for us" (Hebrews 6:20). So what will happen to Christ’s people on the last day, has already happened beforehand to Christ himself on his ascension day.

Christ’s human body was not left on earth, or in outer space, but was changed into an eternal glorified body, no longer of flesh but fit for heaven.

The disciples who saw Jesus ascend into heaven did not see this change into an immortal body, because "a cloud received him out of their sight" (Acts 1:9).

So John says, "It has not yet been revealed what we shall be. But we know that when Jesus is revealed we shall be like him, for we shall see him as he is" (1John 3:2).

Paul makes it clear that Jesus still has his body, although in glorified form: "In him all the fulness of the Godhead dwells bodily" (Colossians 2:9).

2 What Happened to His Human Status?

Some people believe that Jesus ceased to be human when he was glorified and exalted. However this is not affirmed in the scriptures. Although exalted to the highest place, he is still called a “man”.

"There is one God and one mediator between God and mankind, the man Christ Jesus" (1Timothy 2:5).

"The first man was of the earth and made of dust. The second man is the Lord from heaven" (1Corinthians 15:47).

It is true that Jesus is "a life giving spirit" (1Corinthians 15:45). But that does not mean he is disembodied and no longer human.

Lower than the angels

"We see Jesus, who was made for a little while lower than the angels so that he could suffer death... In all things he had to be made like his brethren, so that he might be a merciful and faithful High Priest..." (Hebrews 2:9,17).

Since Jesus has been glorified and exalted, his status is no longer lower than the angels, but above them. He is a man exalted, yet a man nevertheless.

Now highly exalted over all

"Being found in appearance as a man, he humbled himself and became obedient unto death, even the death of the cross. Therefore God has highly exalted him and gave to him the name above every name, that at the name of Jesus every knee should bow..." (Philippians 2:8-10).

That statement puts Jesus now above the angels and gives him the authority of God. The name above every name is not “Jesus” but “Jehovah”. He is the man Jesus, and he is also the God Jehovah.

Note —The name Jehovah, the special name of God, is also rendered “Yaweh” or “YHWH” or “LORD”

3 What Happened to His Throne?

In considering the present status of Jesus, we must include his kingship and his throne. Peter spoke about this on the day of Pentecost after Christ’s resurrection.

"David was a prophet, and knew that God had sworn an oath to him that from the fruit of David’s fleshly body God would raise up the Christ to sit on his throne... This Jesus God has raised up... exalted to the right hand of God..." (Acts 2:30-36 in part).

God promised David, "I will raise up your descendant after you... and I will establish the throne of his kingdom forever. Your house and your kingdom... and your throne shall be established forever" (2Samuel 7:12,13,16).

This must mean that Christ’s kingdom and throne, although inherited from David, would be established in heaven, not earth. Nothing on earth is “forever”.

Jesus is "the blessed and only Potentate, the King of kings and Lord of lords, who alone has immortality, dwelling in unapproachable light, whom no man has seen or can see, to whom be honour and eternal power. Amen" (1Timothy 6:15-16).

Jesus himself said, "To him who overcomes, I will grant to sit down with me on my throne, just as I also overcame and sat down with my Father in his throne" (Revelation 3:21).

Christ is subject to His Father

This does not mean that Jesus has demoted or usurped his Father, but that he shares the Father’s glory and the Father’s throne. He is at his Father’s right hand —a place of highest honour but of deference to God.

Christ’s subjection to his Father will always be so —even after the end of the world. "The Son himself will also be subject to him who put all things under him" (1Corinthians 15:27-28).

So we see that Christ at present shares the highest name and the highest throne with his Father, but always keeps himself subject to his Father. And so it shall always be. Amen.

Jesus Christ’s fleshly body was glorified, made immortal at his ascension. He was exalted above the angels, but did not cease to be man. As both God and man, he reigns forever on his Father’s throne at his Father’s right hand.