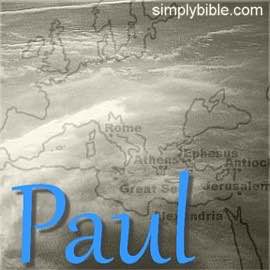 It is a good practice, when studying any New Testament letter, to pay special attention to the opening and closing verses, and to do so at one and the same time. This helps us to get a feel for the atmosphere and circumstance in which the letter was written and which helped to form its content.

In the opening and closing verses of Paul's letter to the Colossians, several of his associates in the gospel work are mentioned. In this lesson, we observe the qualities of the relationship that these men enjoyed together with all the members at the Colossian congregation.

Here are the names of the men Paul Mentions in Colossians...

Timothy and Luke are well known to us. Some of the others are mentioned elsewhere in scripture. Two, Nymphas, and Jesus called Justus, we know nothing else of except what is said about them here in Colossians.

There was a warm comradeship and loving brotherhood between these men. Of course this was not between these men alone, but characterised the whole congregation at Colossae under the guidance and example of these men. They had a reputation for their "love toward all saints", a "love in the Spirit" (Colossians 1:4,7).

Paul calls these folk "brethren" (Colossians 1:2). This is a plural form of the word brother, and especially refers to brothers in Christ. In this sense the word is not gender specific, but is used generically to include both brothers and sisters in Christ as one undivided brotherhood.

It may indeed be that one of the "men" in our list, namely Nymphas, is in fact a woman, since some manuscripts have the name in feminine form Nympha (Colossians 4:15).

Paul speaks of Timothy as "our brother" (Colossians 1:1) another instance of how these Christians regarded each other as members of a spiritual family joined together by a bond of love.

The comradeship and fellowship is also expressed in Paul's reference to Epaphrus as "our beloved fellow bondservant" in which the word "fellow" should not be passed over without notice (Colossians 1:1-2, 7-8).

As we try to restore New Testament Christianity, we are not only to restore New Testament doctrine and worship, but also to revive the real brotherhood, comradeship, and fellowship that characterised Paul and the Christians with whom he associated. This loving brotherhood, comradeship, and fellowship really shines out of the opening and closing verses of Colossians.

There was a mutual trust between these men, a confidence and respect in sharing important duties. Epaphrus, for instance, is called "a faithful servant of Christ on our behalf" (Colossians 1:7).

This short description is as good as a thousand words. It tells us that Epaphras could be trusted —he was "faithful". He could be trusted, furthermore, to do the right thing by others.

Trust as the Norm

Epaphras was not alone in this characteristic. Tychicus is distinguished with the same description (Colossians 4:7), as is Onesimus (Colossians 4:9). The whole congregation in fact, is called "faithful" (Colossians 1:2).

This trustworthiness was a general characteristic of these fellow workers who recognized and encouraged it in each other. For example Paul encourages Archippus to "take heed to the ministry which you have received from the Lord that you may keep on fulfilling it" (Colossians 4:17).

There are always differences among men that can destroy trust if we let them. We notice, for example, Paul's reference to some of the men named as "the only fellow workers for the kingdom who are from the circumcision" (Colossians 4:17).

One has to ask why so few Jewish men were among this present band of brothers. No doubt there was tension between Jew and Gentile, and some allowed this to affect their trust of one another. We can almost feel Paul's regret that so few Jewish brethren could fully accept and trust the Gentile brethren.

We today also have differences which we should not allow to errode or hinder trust between us. We should be constantly restoring trust and building bridges between our differences.

In each of these men there was an unselfish, dedicated, sacrificial devotion to the duties they shared. We have touched on this a little, but it deserves to be made a point in its own right.

Paul refers to Epaphras and Tychicus as his fellow bondslaves (Colossians 1:7, 4:7,12). The devotion to the gospel work was such that each man gave himself up to it and became the bondslave of Christ. A slave lives to serve his Master, not to serve himself. He is expected to sacrifice himself for the Master's good.

Paul mentions Aristarchus as his "fellow prisoner" (Colossians 4:10). It takes great devotion to endure imprisonment on account of one's service to Christ.

The men Paul loved were willing to do so, if it came to it. The lonliness of being locked up and not allowed to freely go and visit your brethren is echoed in Paul's plea, "Remember my imprisonment" (Colossians 4:18).

Most of us are allowed to keep our freedom, but we are all supposed to have "a deep concern" or "great zeal" and to be found "laboring earnestly" in serving our Lord and working with our brethren (Colossians 4:12-13).

The spirit of self sacrifice out of loving concern is an essential element in our fellowship in the gospel.

Not all of us are preachers, but all of us should be ready and willing helpers. Can you imagine, for example, "Luke the beloved physician" (Colossians 4:14) saying, "I'm not available" when called upon to minister to the sick in the church?

I'm not referring only to those who are too busy doing their own thing (or too tired from doing it) to be helpers when needed. There are also those who do nothing to help because they think there is nothing they can do.

Sometimes indeed there is not much opportunity to help. However there is one essential ministry we can all do. Epaphras sets an example in it. Paul mentions to the Colossians that Epaphras was "always laboring earnestly for you in his prayers" (Colossians 4:12).

Even when there is not much else we can do to help the work of the gospel and the needs of the saints, we can always be a helper on hand in this: we can labor earnestly for them in prayer.

There are different sorts of relationships between men.

That last relationship is at its best when the men are Christians. It was this third kind of relationship that Paul enjoyed with the men he mentions in his letter to Colossae.