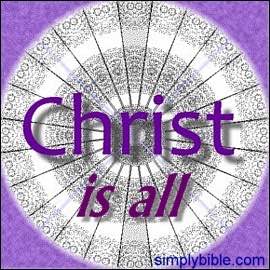 Christ, Head of His Church
—and his church is his kingdom

Having considered Christ’s full divinity, we now come to our third theme in our study of Colossians —Christ’s Full Reign. We begin this theme with Paul’s statement, "And Christ is the head of the body, the church... that in all things he may have the first place" (Colossians 1:18).

A Modern Idea to Consider

Popular eschatology (teaching about the second coming of Christ) makes a distinction between Christ’s church and Christ’s kingdom. It says that the kingdom is a future kingdom on earth which will last for 1000 years.

The kingdom was intended to be set up at Christ’s first coming, but popular eschatology says that God’s plan was frustrated and failed. So God’s new plan is to set up the kingdom at Christ’s second coming instead.

What to do in the meantime? It is claimed that God stopped the clock of prophecy. Then Christ set up his church to fill up the 2000 year gap (or “parenthesis”) until the clock ticks again and the kingdom can at last come.

So the church of Christ is thought to be a stop-gap measure, a forerunner to the kingdom, not the very kingdom itself. The church is seen as a temporary measure until the kingdom comes in its fulness.

Furthermore in popular thinking, the church is regarded as invisible on earth. By contrast the future kingdom on earth is regarded as a material and visible kingdom. All visible churches are regarded as man-made denominational institutions.

In a list of beliefs about Christ, which show Christ’s divine power, Paul includes Christ’s headship over the church, his body of called out people (Colossians 1:15-18). This item is not inferior to the others on the list.

Paul goes on to say that all the fullness dwells in Christ, enabling him to effect, through his blood, full atonement (Colossians 1:14-20). In Paul’s thinking, neither "head" nor "body" is given an inferior status (Colossians 1:18).

After saying that Christ is the head of the church, and speaking of his pre-eminence in this position, Paul adds, "For it pleased the Father that in him all the fullness should dwell" (Colossians 1:18-19). That is, as head of the church.

Paul later says, "You are complete in him who is the head of all principality and power" (Colossians 2:10). Christ reigns, and people in him (in his body) are complete.

As Paul said to the Ephesians along similar lines, "God put all things under his feet, and gave him to be head over all things to the church, which is his body, the fullness of him who fills all in all" (Ephesians 1:22-23).

Paul saw the church as "holding fast to the head, from whom all the body, nourished and knit together by joints and ligaments, grows with the increase that is from God" (Colossians 2:19).

Earlier Paul speaks of the church members as "rooted and built up in him" (Colossians 2:6-7). Just as Christ promised, “I will build my church”, so he does, visibly today.

And in this body "there is neither Jew nor Greek, circumcised nor uncircumcised, Scythian, barbarian, slave nor free, but Christ is all and in all" (Colossians 3:11). There are no longer different bodies, different flocks, different callings. Rather all the called out of Christ are one kingdom.

Christ brought "peace through the blood of his cross" (Colossians 1:20) and "to peace you were called in one body" (Colossians 3:15). Did Christ die for an inferior stop-gap body?

3 The Kingdom is the Church.

Paul declares, "God has delivered us out of the power of darkness and conveyed us into the kingdom of his dear Son" (Colossians 1:13). Here Paul speaks of the kingdom as an accomplished fact, not a postponed promise. The saved were in the kingdom back then.

Five verses later, Paul declares, "And he is the head of the body, the church..." (Colossians 1:18). Since Christians were in the kingdom, and in the body, surely the body is the kingdom.

Paul regarded his own ministry and sufferings as "for the sake of the church" (Colossians 1:24-29). Yet Paul describes his few comrades as "fellow workers for the kingdom of God" (Colossians 4:11). The church is the kingdom.

Paul’s mission was "to fulfill the word of God, the mystery hidden from ages and generations, but now revealed..." (Colossians 1:24-26). Christ’s death, resurrection, and ascension to God’s throne was planned and it came to pass.

Paul believed that God’s called out people "may stand perfect and fully assured in all the will of God" (Colossians 4:12). It was prophesied that Christ’s kingdom should come at his first advent. God’s kingdom came. God’s will was done.

So we conclude that the fullness of Christ is seen in his headship over his body of called out people, the church. This body is nothing less than the glorious kingdom of God’s dear Son.