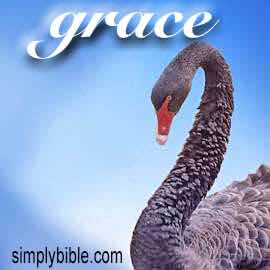 Grace and Power
—The Messiah’s Might, Majesty, and Mercy

Jesus said of himself, "All power has been given to me in heaven and on earth" (Matthew 28:18). His authority as the Messiah, the Son of God, is awesome, and absolute. The authority of Jesus is no less than the very authority of God. His power should cause us to tremble in his presence.

And yet, without diminishing his power, he is the opposite as well. He is gentle and compassionate, human and kind. He says, "Come to me... for I am meek and lowly in heart and you shall find rest for your souls" (Matthew 11:28-29).

To get some perspective on the power and grace of Christ, let's consider three things about the Messiah: he is (1) mighty in government and law, (2) majestic in glory and light, (3) merciful in grace and love.

Although the first two are opposite to the third, the three are nevertheless in complete harmony, and one is not diminished by the other. So wonderful is Christ, that these three characteristics are true to the utmost degree.

1 Mighty in Government and Law

"For unto us a Child is born. Unto us a Son is given, And the government shall be on his shoulder. And his name shall be called Wonderful Counselor, Mighty God, Everlasting Father, Prince of Peace. There will be no end to the increase of his government and peace..." (Isaiah 9:6-7).

This shows us how powerful is this Son, this Prince of peace. He has such authority that he wears the name “Mighty God”. This is not the name of some lesser God. This is the name of the “Eternal Father”. This does not mean that Christ is the Father. Clearly he is the Son. But he carries the name of the Father and is therefore so united with the Father that he can say, "I and my Father are one" (John 10:30).

If Christ were a second God besides the Father, the Father would not have bestowed his name on Christ. For God said, "I am the LORD. That is my name, and my glory I will not give to another" (Isaiah 42:8). Yet the Father has "given him [the Son] the name which is above every name" (Philippians 2:9). God does not regard the Son as another God, but as the same God as himself. The two, Father and Son, are so united as to be regarded, individually and severally, as one Mighty God.

"At various times and in different ways, God spoke in times past to the Fathers by the prophets. But in these last days he has spoken to us by his Son... the mediator of the new covenant" (Hebrews 1:1-2, 9:15).

"There is one God and one mediator between God and humanity, the man Christ Jesus" (1Timothy 2:5). His authority as “the man” is no less than the authority of God, with whom he is one.

How fearful we should be if we change or meddle with the covenant Christ has mediated to us. It is the law of Almighty God no less, delivered to us by the man who is one with God and carries God’s name.

His Government and Throne

Peter declared that Jesus had been, as prophecy said, raised up to sit on David’s throne. Christ ascended to the right hand of God (Acts 2:30-33). Jesus says, "I overcame and sat down with my Father on his throne" (Revelation 3:21). In the same verse Jesus calls that throne “my throne”.

Of course, David’s throne, Christ’s throne, and the Father’s throne are not three different thrones. They are one throne, God’s throne. Jesus, being God, has the authority to occupy it permanently.

Now Jesus does not occupy the throne for somewhere to sit down. He occupies the throne to rule. And he rules according to the law of the new covenant he mediated to us. We should submit ourselves to no earthly religious rulers, but rather to the rule and law of Christ. We do this by following his covenant and pursuing his righteousness revealed in it.

2 Majestic in Glory and Light

Paul wrote to Timothy, "O man of God, flee these evils and pursue righteousness, godliness, faith, love, patience, gentleness. Fight the good fight of faith. Take hold of eternal life to which you were also called. You confessed the good confession before many witnesses." (1Timothy 6:11-12).

Then Paul describes Jesus Christ1 as "the blessed and only Potentate, the King of Kings and Lord of Lords, who alone has immortality, dwelling in unapproachable light, whom no man has seen or can see. To him be honour and everlasting power. Amen" (1Timothy 6:15b-16).

1Note:— Christ or the Father? Some English versions of 1Timothy 6:15-16 insert the word "God" into the doxology. For example, "...God will manifest in his own seasons, God the blessed and only Potentate..." This isolates the doxology from "our Lord Jesus Christ" in verse 14, and attributes it instead to God [implying the Father]. The word "God" is not in the Greek and its insertion into the text could be seen as interpretation rather than translation. The majesty and glory of Christ is equal to —not less than— the majesty and glory of his Father, which the Father granted to him (Philippians 2:8-11).

Paul’s statement makes Jesus equal with God, dwelling in the light of God on the heavenly throne of God. Jesus is unique. No other human being has such majesty and glory. Nor could we, in our present form, behold him as he now is. Moses wished to see the glory of God. God said, "You cannot see my face and live" (Exodus 33:17-23).

While Jesus was here on earth, Peter James and John saw him transfigured. After he ascended to heaven, Stephen, Paul, and John, saw visions of Jesus. However these experiences, as awesome as they were, did not expose the seers to the raw brilliance of Christ’s majesty. Of course, when Jesus comes again, we will see him as he is, because we shall be changed into a form like his (1John 3:1-3).

In the meantime we do not have to live in darkness. Jesus said, "I am the light of the world. He who follows me shall not walk in darkness, but have the light of life" (John 8:12).

Shall we not share David’s awe and say with him, "I will meditate on the glorious splendour of your majesty" (Psalm 145:5)?

3 Merciful in Grace and Love

Wait, there's more... A little further down in that Psalm, David makes a contrasting statement: "The LORD is gracious and full of compassion, slow to anger and great in mercy. The LORD is good to all" (Psalm 145:8-9a).

Although Jesus Christ our High Priest is in the highest place of authority, he "is not someone who cannot sympathise with our weaknesses. Although he did not sin, he was tempted in all the same ways as we are. So we can come with confidence to the throne of grace. There we will find mercy and grace to help whenever we need it." (Hebrews 4:15-16).

It would be easy to think that because his power is so huge, he could hardly be gentle and compassionate and tenderly bless us with grace. But he can, and he does.

Although we think of grace and mercy as opposite to law and authority, there is no conflict between the law and grace of Christ. His grace and mercy come to us by his covenant. Mercy and grace are written into his law. So that we may be forgiven and be saved from the punishment for our sins, the covenant calls for Christ to make the ultimate sacrifice for sins (Isaiah 53). And this he did.

His covenant also requires a response from us to his grace and mercy. Paul tells the story of his confrontation with our Lord, the mercy given him, and the response required of him (Acts 22).