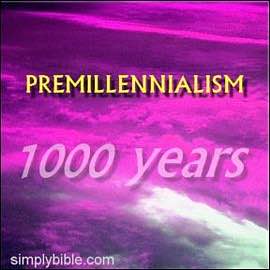 The Rapture
—Errors of the premillennial version

The promise of the rapture is very precious to the Christian. We look forward to this wonderful moment at the end of the world, which could occur at any time. Paul tells us what is going to happen...

¶“16The Lord himself will come down from heaven with a shout, with the voice of an archangel, and with the trumpet of God sounding. First the dead in Christ will be raised. 17Then we who are alive and remain shall be caught up in the clouds, together with them, to meet the Lord in the air, and thus we shall always be with the Lord” (1Thessalonians 4:16-17).

The Greek word for "caught up" is translated rapere in the Latin. Hence the term "rapture" is often used to describe this coming event, since "rapture" comes from rapere and means to be caught up and carried away in great joy.

A Strange Version of the Rapture

Unfortunately this beautiful promise has been spoiled by popular yet false teaching about the rapture. Many teach that before Jesus makes his visible return, he will come some years earlier. This coming will be unheard and unseen by the world.

At this invisible return, the Lord’s angels will gather up all members of the church both living and dead. They will be caught up to meet Jesus in the air and he will lead them into heaven. They will remain for only a short while, until Christ returns to earth again at his visible coming. They will go with him back to earth.

The rapture will come as a shock to unbelievers. They will not be able to see Jesus. But they will notice the sudden disappearance of any Christians in the vicinity. For example, some cars on the roads will be left uncontrolled. There is a car bumper sticker which reads: "Beware: In case of Rapture this car will be driverless".

While Jesus and the church are visiting heaven, there will be a dreadful tribulation in the world.

Three Errors on the Rapture

There are three elements in the above version of the rapture, that are not found anywhere in the Bible. Let’s look at these three ideas in more detail.

Premillennialists say that, at the rapture, Jesus will be invisible to unbelievers. But neither the word "invisible" nor the idea can be found in any Bible verses about the rapture. It is certainly not here in 1Thessalonians 4:13-18.

"As a Thief in the Night"

We may be asked to go to the next chapter where Paul uses the phrase "as a thief in the night" (1Thessalonians 5:2), as if that suggests invisibility. However the next verse shows in what sense Jesus’s coming will be like a thief in the night. It is not invisibility, for this coming brings "sudden destruction" upon unbelievers (1Thessalonians 5:3).

If we go on one more chapter, into the second epistle, we see what kind of destruction Paul has in mind. It is not destruction from, say, a driverless car, but rather "eternal destruction... when the Lord Jesus shall be revealed from heaven with his mighty angels in flaming fire, dealing out retribution... on that day when he comes to be glorified in his saints" (2Thessalonians 1:7-10).

This is confirmed when Peter also describes the day that "will come like a thief". According to him, it is the day "in which the heavens will pass away with a great noise and the elements will be destroyed with fierce heat" (1Peter 3:10-13). Furthermore Peter has us Christians still here on earth, not in heaven, looking for this day to come (1Peter 3:10-14).

Yet there is no hint of two comings in the verses we have been looking at, nor anywhere in the scriptures. Like the idea of invisibility, the idea of two returns of Christ has been taught, with enthusiasm, as though it is Bible doctrine. But it isn't in the Bible at all.

The Bible consistently teaches that Christ came once, long ago at the end of the ages, and he will come once more, "a second time..." (Hebrews 9:28) —not two second times or a second and third time.

In premillennial teaching, the raptured saints are supposed to be with Jesus in heaven for a few years before coming back to earth. However the Bible makes no mention, nor even a hint, of this brief stay in heaven.

Look at 1 Thessalonians 4:17 and the surrounding verses again. The text clearly tells us how long the ones who are caught up will remain in heaven. It says, "and thus we shall always be with the Lord." There is a lot of difference between "always" and just a few years.

Note:— You may have noticed how that where the Bible teaches there will be one of something, popular "eschatology" says there will be two. In this lesson you will note that the Bible has one second coming, not two, and Christians will go once to heaven —once for ever— not twice