We continue to look at the symbolic time spans in vision and prophecy, especially at the phrase "a time, times, and half a time". In this lesson, we focus on the numbers of days that we find in Daniel’s prophecies.

In the Bible's presentation of tribulation and the antichrist, I believe there are two elements woven together.

Let me suggest an interpretation of the days at the end of Daniel (Daniel 12:7-13) which follows this line of thought and sees in these symbolic days not only the broad world view, but also sees oneself and one's own lifetime represented.

1 The Dividing of Days 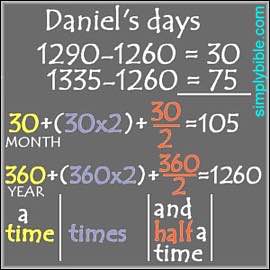 Second element: A remainder of days (convert to symbolic months —30 symbolic days to a month).

2 The Burden of Months

I don't regard the two numbers of days as separate periods but as one period of 1260 days with a burden added. In the first instance (1290) there is a burden of one month added, whilst in the second instance (1335) there is added a greater burden of of two months, then a lesser burden of half a month.

3 The Symbol of Self

We can think of the symbolic years as representing the world, whilst the symbolic months represent our individual lives. Daniel is seeking knowledge of the world, but the angel turns Daniel’s attention to himself and his own lifetime: "As for you, go your way to the end, then you will enter into rest and rise again for your alotted portion at the end of the days" (Daniel 12:13).

Each of us, like Daniel, has an interest and a place in world history and in the world future. But we don't live in history nor in the future but in the present. World history and the world future are symbolically represented as 1260 days or a time, times and half a time in symbolic years. Our own personal lifetime is symbolically represented as 30 days or a "time" in symbolic months.

Essentially this means a time of tribulation. In our lifetime, as a child of God, we will suffer. It may even be that we suffer double trouble (two months or two "times") but God helps us along the way and he makes the seem like "half a time" (half a symbolic month).

These symbolic times are an encouragement to us. In times of tribulation God will not forsake us. He will effectively halve our troubles even though the world may double them.