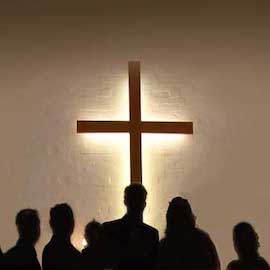 Why Worship Together on Sunday?
—the assembly in 1 Corinthians

In Paul’s first letter to the Corinthians, he was concerned about the conduct of the Christians at Corinth when they all assembled together. Paul’s instruction to the congregation in Corinth on that topic is also instructive for us.

In this lesson we note three passages in 1Corinthians which together show that the Lord requires Christians to assemble every Sunday and to participate in worship in three ways —the Lord’s Supper, Vocal worship, and the Collection.

There is a school of thought, which currently has a loud voice, denying any mandate or pattern for the assembly of Christians in a given locality on the first day of the week for five acts of worship. Such an assembly is said to be merely “church of Christ tradition”.

1Note:— The Greek translated above as “assembly” and “congregation”, is  εκκλησια ekklesia. It is usually translated “church”.

Unfortunately the Corinthians did not conduct themselves well in their assemblies, so Paul had to instruct them accordingly. In that teaching Paul showed them the proper conduct for the Lord’s Supper, prayer, singing, teaching, and giving.

Although Paul is writing to the Corinthian Christians about their assembly in particular, his teaching can be generally applied in principle to Christians in any place and time.

Of course we don't imitate the culture and customs of first century Corinth, nor the errors of the Christians there. But we should value and follow Paul’s inspired ideal of a faithful congregation. This ideal is reflected clearly in his teachings.

For example, when Paul tells the Corinthians that "there should be no divisions among you" (1Corinthians 1:10), isn't this a pattern for all congregations?

Even though Paul teaches the Corinthians about division in a personal and specific way, the general principle of "no divisions" clearly belongs in the model of the ideal ekklesia.

What Paul ordered the Corinthians to do, all Christian assemblies should imitate in principle. By the comparing of scripture we can let the word of God show us the model of ideal behaviour for any local ekklesia.

Now I will demonstrate this by three selected passages in Paul’s first letter to the Corinthians. Of course there are many other scriptures I could refer to, but let's keep it simple.

¶“20When you come together, it is not the Lord’s supper that you eat. 21For everyone goes ahead with eating their own meal. One goes hungry, another gets drunk. 22What! Don't you have houses to eat and drink in? Or do you despise the called out people of God and humiliate those who have nothing? What shall I say to you? Shall I praise you in this? You'll get no praise from me.” [The rest of the chapter speaks to the proper observance of the Lord’s Supper]

Little comment is needed on this passage. It shows that the Christians in Corinth were in the habit of assembling together, and at this assembly (or ekklesia) they were to partake of the Lord’s Supper in a proper manner.

¶“24But if all prophesy, and an unbeliever or outsider comes in, he is convicted by all; he is called to account by all. 25The secrets of his heart being disclosed, he will fall on his face and worship God. He will declare that God is really among you.” [The entire chapter is about the proper use of spiritual gifts, and the proper conduct of speakers, in the assembly]

In this passage Paul deals with the matter of speaking in the assembly, whether that be in praying, singing, or teaching. He urges that all speaking be done in an orderly manner, according to certain rules, and especially such that the hearers understand.

That rule, requiring orderly and understandable speaking in the assembly, is surely applicable to any congregation, not just the congregation at Corinth. We should see here a model for any ekklesia.

The Word of the Lord

Observe also that Paul says, "If anyone thinks himself to be a prophet or spiritual, let him acknowledge that the things which I write to you are the commandments of the Lord" (1Corinthians 14:37).

This implies that anyone who speaks from Paul’s writings, representing and applying them accurately, is speaking the word of the Lord no less than someone who was using the gift of prophecy or similar miraculous gift.

We should therefore regard Paul’s rules for prophets speaking in the assembly as applicable to speakers in any Christian congregation, even when they speak from the inspired scripture rather than by direct inspiration.

¶“1Now concerning the collection for the saints: as I directed the congregations of Galatia, so you also are to do. 2On the first day of every week, let each of you put in store as he may prosper, so that there will be no collecting when I come. 3And when I arrive, I will send those whom you approve by letter to carry your gift to Jerusalem. 4If it is suitable for me to go also, they will accompany me.”

Many today are denying that this passage has any reference to the Corinthian’s assembling in one place to worship together. Their denial is wrong.

Joining these phrases together would make Paul say, "the whole congregation assembles... on the first day of every week" (1Corinthians 14:23, 16:2). Does this misrepresent Paul? Is this twisting scripture?

Obviously, if you join fragments of scripture willy nilly, you get nonsense. But you don't get nonsense if the connection is sensible as in the case just given.

Paul was commanding Christians to contribute to the Jerusalem relief fund in such a manner that all donations would be collected and waiting "that there be no collections when I come" (1Corinthians 16:2).

First Day of the Week

Paul could have written, "When the whole congregation assembles in one place, let each of you put in store as he may prosper, so that there will be no collecting when I come." That was precisely what he had in mind.

However, Paul actually wrote, "On the first day of every week, let each of you put in store as he may prosper, so that there will be no collecting when I come." (1Corinthians 16:2). And the Corinthians still understood precisely what Paul had in mind.

It is beyond doubt that the Corinthian Christians all assembled together on the first day of every week, and among other activities they brought and handed in their contributions toward relief in Jerusalem.

This is not a commandment for the Corinthians alone, but for all congregations. There are always needs arising and this regular giving and collection of funds keeps the congregation ready to meet the needs.

In Paul’s instructions to the Corinthians we can see a model of how Christians in any locality should come together into one place and worship God together.

Whilst Paul mentions details particular to the Corinthians, he also teaches principles applicable to all congregations of Christ.

Christians in any locality should assemble on the first day of every week to observe the Lord’s Supper, pray, sing, hear the word of God, and give alms.