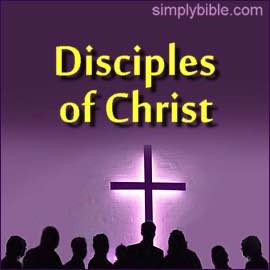 Chapter sixteen of Paul’s letter to the Romans contains 34 names. Three of these are familiar to us: Priscilla, Acquilla, Timothy. Of the other 31, nothing is known, and very little can even be speculated. One or two names appear elsewhere in the Bible, however we don't have any way of knowing whether they are the same persons.

So here we find the names of 31 persons whom we might call the “unknown disciples”, and of course we can find others referred to in the chapter who are not named.

We do, of course, know more about these folk than just their names, for this chapter that records their names also tells us three important and beautiful things about these people. Had they not shown these qualities, their names would not have been recorded. These folk are representative of what Christians in general should be. Let’s look at the three qualities in which these unknown disciples have set us an example.

You will find people in this chapter who "laboured much" in the Lord (Romans 16:6,12), people whom Paul was proud to call his "fellow workers" (Romans 16:9).

Have a look through the chapter and see how many workers you can find.

APOSTLES Two of the unknown disciples are called "outstanding among the apostles" (Romans 16:7). The word “apostle” means one sent —that is to say, sent on a special mission.

This does not mean they were apostles with the same authority and power as the twelve apostles or as Paul, but it does mean they were commissioned men charged with spreading, establishing, and defending the word of Christ. They did this work in an outstanding manner.

HELPERS Not everyone can be apostles as described above. However anyone can be "a servant... a helper" and be commended as highly as any other kind of worker (Romans 16:1-2).

Any disciple who in some way helps another in the Lord’s work is to be regarded as a fellow in that work, for without that help the work could not be done! Paul especially mentions Gaius as "host to me and to the whole church" (Romans 16:23).

You will find people in this chapter who were dedicated and whom Paul was pleased to refer to as "saints". A saint is a sanctified person, which means one who is holy, dedicated, separated to a sacred task.

DEDICATED A fine example of dedication to the Lord's work is Prisca and Aquila of whom Paul says, "for my life they risked their own necks" (Romans 16:3).

While these two are not entirely unknown disciples, this important fact about them would have remained unknown had Paul not mentioned it here.

CHOSEN In the Bible, the concept of sanctification goes together with that of election or being chosen by God. Hence, one of the persons named is called "the approved in Christ" (Romans 16:10), and another "a choice man in the Lord" (Romans 16:13).

HOLY All the disciples are to "greet one another with a holy kiss" (verse 16). We may change the kiss (according to our culture) to some other form of affectionate greeting. But we must retain the character of the greeting for that is cross-cultural. It is always a "holy" greeting.

Kisses and embraces between disciples of Christ should be the kind that brothers and sisters, mothers and sons, aunts and nephews, give each other. They are signs of affection without any sexual element to them.

OBEDIENT The joy of saints (holy ones) in Christ is expressed in verses 19-20. It exists when the disciples show "obedience" to the Lord and are "wise in what is good; innocent in what is evil" —and don't mistake innocence for ignorance or have their eyes blind to evil.

Another aspect of the relationship between disciples of Christ is brought out strongly in this chapter. This is the family relationship. People become "kinsmen" in Christ (Romans 16:7,11) although they may have no biological relationship.

AFFECTIONATE Paul refers to these disciples as "brethren" (that is to say brothers and sisters). He even calls one person his "mother". She was the mother of Rufus, but there was a spiritual and certainly affectionate mother-son relationship between her and Paul (Romans 16:13).

RESPONSIBLE The relationship between disciples of Christ is not merely affectionate, but like any kin or family relationship, it is responsible. When somebody in the family is misbehaving and is being rebellious, offensive, divisive, then the family disciplines that person. That’s what verses 17-18 are about.

Paul is an affection man, but he doesn't resile from calling some kinsmen in Christ "slaves of their own appetites" or accusing them of "smooth and flattering speech by which they deceive the hearts of the unsuspecting". These are stern and even harsh words, but they are deserved.

Paul is not going to be all affection and no rebuke. He is not going to say "kiss" these wayward kinsmen. Rather he says "turn away" from them. Warm handshakes, smiles, hugs, and kisses, are all very well. But don't let them be hypocritical and irresponsible.

ESTABLISHED This brings us to the last verses of the chapter, 25-27. An important feature of any good family is its stability, its ability to close ranks and survive adversity, its ability to put down roots and become established.

If we practice discipleship as workers, saints, and kinsmen, then God will "establish" us as promised in the "revelation" of the "gospel" which Paul and other church prophets and apostles preached.

If we are disciples like that, then we will bring "glory forever" to the "only wise God through Jesus Christ". You cannot be more established than to be a family forever, yet that, no less, is what God’s true church family will be.