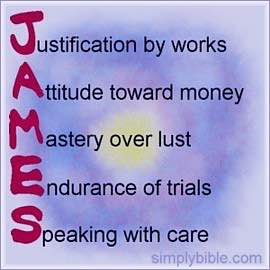 Justification by Works
—The J in James

This lesson is the first of five lessons from the letter written by James. Here in this first lesson, James teaches us how works are associated with justification.

1 A chain of verses to get us started

James 1:21   tells us to "Receive the implanted word which is able to save your souls"

James 1:22   explains exactly what it means to receive God's word: "Be DOERS of the word and not hearers only".

James 1:27   mentions some of the things included in being DOERS: "Visit the fatherless and the widows in their troubles and keep oneself unstained by the world""

James 2:12   All through his letter James emphasises ACTIONS: "So speak, and so ACT, as those who are to be judged by the law of liberty".

In the scripture chain we just looked at, James tells us about the need for answering God's word with DOING and ACTION. James also uses the word "works" which means exactly the same thing, namely DEEDS or ACTIONS by which we OBEY "the implanted word".

Luke 6:46   Jesus once said, "Why do you call me Lord, Lord, when you don't DO what I say?". When we try hard to put our faith into PRACTICE, by doing the things that Jesus commands, we are doing "works".

James 1:21   introduces the idea of receiving the implanted word with this instruction: "Putting aside all filthiness and all that remains of wickedness" So we see that NOT DOING WRONG is just as important to "works" as DOING RIGHT.

James's idea of "works" includes NOT DOING things that are sinful or harmful. You may have noticed this fact when we looked at James 1:27.

Good works means DOING RIGHT —"visit the fatherless and the widows". However, good works also means NOT DOING WRONG —"keep oneself unspotted from the world".

James 2:14-26   is a part of his letter where James talks in detail about the need for "works". Please read it carefully.

We will now spend some time studying this passage as a series of word-pictures that illustrate the need for "works" together with faith.

5 The word pictures that James uses

As we were reading James 2:14-26, you may have noticed that James uses a series of thought pictures to illustrate the need for "works" with faith.

James 2:15-17  Imagine a cold and hungry person needs help. All you give them is nice words -words without works are useless. In the same way faith is useless without works.

James 2:14,18 Imagine two people arguing about faith and works. One claims to have faith alone. The other challenges him, "Show me your faith! You can't! But I can show you my faith by the works that accompany it". Faith is like electricity -invisible and worthless until it DOES something. You can pull a driver's licence out of your pocket to show you drive a car, but there's no document to prove you have faith - except the "document" of a life filled with good works

James 2:19-20 Imagine the demons -they believe in God. But the only thing their "faith" makes them DOis shake in their shoes!

James 2:21-24 Imagine Abraham offering his son on the altar. Abraham proved his faith by showing he was willing to DO whatever the Lord required of him.

James 2:25 Imagine Rahab the harlot helping the men of God. She was not justified by what she was (a prostitute), but by what she DID out of faith.

James 2:26 Imagine a dead body. It is cold and grey and still. It will soon begin to rot. That's because it has no spirit. In the same way, faith, if it has no works, is dead. It is interesting that in this illustration spirit is parallel to works not faith.

6 What does James mean by 'justified'?

"Justification" is in the same word-family as "justice" and "judgment". If one has done wrong, one is liable to be punished unless a just reason can be found for being let off. Such a reason justifies the one found guilty so that the guilty is forgiven and judged as not guilty. [Example: a man guilty of speeding because he was rushing to hospital with his wife in labour].

We will be let off punishment in hell because Jesus died for us on the cross. God justifies and forgives us for that reason, so long as we have shown faith in the one who died for us. People who don't have faith and who reject Jesus are not justified by his death.

7 Does James disagree with Paul?

We all fall short of God's glory, so boasting of our own righteousness is excluded (Romans 3:27). However God's law is not excluded, and by faith we obey God's law, just as Abraham did. So Paul and James are in agreement.