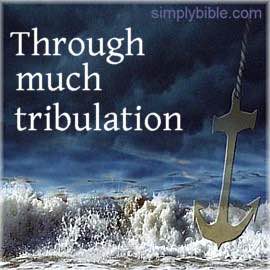 The Tribulations of Jeremiah
—His sad but encouraging story

Jeremiah suffered all kinds of abuse and trials although he was a faithful prophet of God. Although it sounds gloomy, Jeremiah’s story can strengthen and encourage us.

Jeremiah was a prophet in Jerusalem at the time of the seige and destruction by the Babylonians. Jeremiah was contemporary with the kings of Judah named Josiah, Jehoahaz, Jehoiakim, Jehoiachin (Coniah), Zedekiah.

Like most of the prophets, Jeremiah was despised and abused. Time and again it is said, “They will not listen!” (Jeremiah 7:27,

They Will Not Listen

“This wicked people, who refuse to listen to My words, who walk in the stubbornness of their hearts and have gone after other gods to serve them and to bow down to them, let them be just like this waistband which is totally worthless.” (Jeremiah 13:10, NASB).

“Yet they did not listen or incline their ears, but stiffened their necks in order not to listen or take correction.” (Jeremiah 17:23, NASB).

“But they say, 'That is in vain! We will follow our own plans, and will every one act according to the stubbornness of his evil heart.'” (Jeremiah 18:12, ESV).

“Thus says the LORD of hosts, the God of Israel, 'Behold, I am about to bring on this city and all its towns the entire calamity that I have declared against it, because they have stiffened their necks so as not to heed My words.'” (Jeremiah 19:15, NASB).

Jeremiah was not only ignored. He was also mistreated by those to whom he brought God’s message —persecuted by those he was trying to guide and save. Sound familiar? Yes, Jesus Christ was mistreated likewise. Look at some examples of what Jeremiah suffered...

Jeremiah beaten and put in the stocks

“Then the priests and the prophets said to the officials and to all the people, 'This man deserves the sentence of death, because he has prophesied against this city, as you have heard with your own ears.'” (Jeremiah 26:11, ESV).

“As soon as Jehudi had read three or four columns of the scroll from Jeremiah, king Jehoiakim cut them off with a scribe’s knife and threw them into the fire that was burning in the fireplace. He kept on doing this until the whole scroll was burned up.” (Jeremiah 36:23).

Jeremiah left to die in the mud

“Then they took Jeremiah and cast him into the cistern of Malchijah the king’s son, which was in the court of the guardhouse; and they let Jeremiah down with ropes. Now in the cistern there was no water but only mud, and Jeremiah sank into the mud.” (Jeremiah 38:6, NASB).

“Azariah the son of Hoshaiah and Johanan the son of Kareah and all the insolent men said to Jeremiah, 'You are telling a lie. The LORD our God did not send you to say, Do not go to Egypt to live there'” (Jeremiah 43:2, ESV).

By enduring suffering and not giving up the ministry, Jeremiah and the other prophets foreshadowed and shared in the sufferings of Christ of whom they spoke.

3 The Prophet of Christ

"As to this salvation, the prophets who prophesied of the grace that would come to you made careful search and inquiry. They sought to know what person or time the Spirit of Christ within them was indicating as He predicted the sufferings of Christ and the glories to follow." (1Peter 1:10-11).

We too may have to undergo sufferings for the sake of Christ, and thus become partakers in his sufferings. We must endure, sharing in the mistreatment that the prophets and Christ endured.

"Beloved, do not be surprised at the fiery trial when it comes upon you to test you, as though something strange were happening to you. But rejoice insofar as you share Christ’s sufferings, that you may also rejoice and be glad when his glory is revealed." (1Peter 4:12-13, ESV).

People may not listen to us, even religious people. They may block their ears to the gospel, and even call us liars. But we have to keep on telling the message of Christ, and hope that some may listen.

"Preach the word, be ready in season and out of season; reprove, rebuke, exhort, with great patience and instruction. For the time will come when people will not endure sound teaching... They will turn away their ears from the truth, and will turn aside to myths" (2Tim 4:1-4).

“Thus says the LORD, 'Stand by the ways and see; and ask for the ancient paths, where is the good way, and walk in it; and you will find rest for your souls.'  But they said, 'We will not walk in it.'” (Jeremiah 6:16).

WHAT WILL YOU SAY?