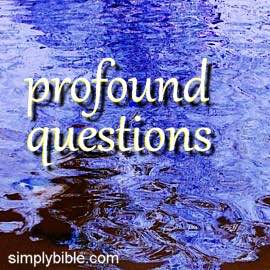 So You Are a King?
—Pilate questions Jesus

Jesus was brought before Pilate, and Pilate asked him, “Are you the king of the Jews?” After Jesus replied, Pilate asked again, “So you are a king, are you?” This put Jesus on the spot: he is a king, but his kingdom is not of this world.

This interview between Pilate and Jesus is recorded in John 18:28-38. What Jesus said to Pilate reveals three serious lacks. One is regrettable, another is deplorable, and the third is commendable.

¶“36Jesus said to Pilate, 'My kingdom is not of this world. If my kingdom were of this world, my servants would have been fighting, that I might not be delivered over to the Jews. But my kingdom is not from the world.'37Then Pilate said to Jesus, 'So you are a king, are you?' Jesus answered, 'You say that I am a king. For this I was born, and for this I have come into the world, to bear witness to the truth'.” (John 18:36-37).

Pilate could find no guilt in Jesus, but that doesn't mean he had faith in Jesus. He did not seek to join the kingdom of Christ, the kingdom “not of this world”.

Pilate showed even less interest in Jesus’s claim to “bear witness to the truth”. He brushed that aside with the quip, "What is truth?" (John 18:38).

You don't have to look far for someone who admits that Jesus was a good man, even a great man. That's a belief about Jesus, but not faith in Jesus. Our Lord Jesus proclaimed the truth that sets you free (John 8:32). Pilate didn't trust that truth and follow it.

Don't Be a Pilate

Pilate was a man of power and status in this world. But he had nothing that he could take with him into the next world —in which he will forever regret his lack of faith.

"And without faith it is impossible to please God, because anyone who comes to him must believe that he exists and that he rewards those who earnestly seek him." (Hebrews 11:6).

People must seek God through Jesus. "I am the Way, the Truth, and the Life; nobody comes to the Father unless through me" (John 14:6). If you lack faith in Jesus, what hope have you got?

It probably seemed to Pilate that he was in a far superior position to Jesus. But Jesus was going to glory, full of faith. Pilate was frightened by Jesus (John 19:8). Certainly, fright can lead to faith; but only faith leads to glory.

2 The Accusers’ Lack of Truth

We turn now to those who were accusing Jesus. Pilate couldn't understand the charges against Jesus. He asked the Jews, "What accusation do you bring against this man?" (John 18:29). He did not get an intelligible answer.

So Pilate asked Jesus, "What have you done?" (John 18:35). Jesus quite rightly declined to answer that directly, because he had done nothing wrong.

The treatment of Jesus in the Jewish courts was unfair and even illegal. The function of any court is to fairly examine a case and discover the truth. But the people accusing Jesus had no interest in the truth. They lacked integrity. They bore witness to lies.

The sad thing about the hypocrisy of the accusers, is that some of them were the nation’s religious leaders. They knew what Jesus had said and taught, because he hadn't taught in secret.

Be Believers in the Truth

On that second point, there are two kingdoms that are not of this world: the kingdom of Heaven and the kingdom of darkness. We are in one or the other of these kingdoms.

We must seek to be "delivered from the power of darkness and conveyed into the kingdom of God’s dear Son" (Colossians 1:13). Only faith in Jesus and his truth can make that happen.

3 The Disciples’ Lack of Violence

We turn finally to the lack in Christ’s servants. Jesus said to Pilate, "If my kingdom were of this world, then my servants would be fighting" (John 18:36). But his disciples were not harming anyone.

Through the ages, some who claimed to be Christians have fought so-called “holy wars” of carnage and massacre. But these wars were most unholy, for Jesus as King is the "Prince of Peace" (Isaiah 9:6).

The Armour of God

Citizens of Christ’s kingdom are at war, but we fight a spiritual battle against the powers of darkness. We don a spiritual armour and take up "the sword of the Spirit which is the word of God" (Ephesians 6:10-17).

What we have seen...

What we have learned...

To conduct ourselves in faith, truth, and peace.