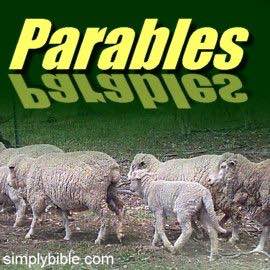 The Sheepfold Parables we looked at in our previous lesson in John chapter 10, contain all seven themes that we noted in our first lesson on the parables. Here we review those seven themes.

1 The grace and mercy of God

Jesus came that we might have life and have it more abundantly. To this end the Son of God was willing to lay down his life for us. Such is the wonderful love and mercy and grace of God.

2 The severity of God

Jesus says, "I give eternal life to my sheep and they shall never perish" after saying to the Jewish leaders "You are not my sheep". The clear implication here is, "You shall perish. There will be no eternal life for you". On those who enter by Jesus the door, and follow Jesus the shepherd God will bestow grace, but those who refuse will know God’s wrath.

3 The importance of obedience

"The sheep hear his voice... and they follow him". Jesus spoke of laying down his life for the sheep, and he said, "This commandment I received from my Father". It was necessary that Jesus obey his Father’s commandment. Surely it is necessary that we also hear and obey the voice of the Son, the good shepherd who was obedient to the point of death, even death on a cross (Philippians 2:8).

4 The value of the kingdom

The sheepfold in these parables is the kingdom of God, and in this kingdom there is salvation and eternal life. To "be saved" to be given "eternal life" is of far greater value than anything else, even life itself. We must be in that kingdom.

5 A spiritual kingdom for all mankind

There is one statement in the sheepfold parables that we have not noticed until now, but it is extremely important. Jesus said, "Other sheep I have, which are not of this fold. Them also I must bring, and they shall hear my voice, and they shall become one flock with one shepherd." Here Jesus is pointing to the gospel of the kingdom which would be preached all over the world, and the Gentiles who believe will be welcomed into the kingdom along with the Jews who believe. The church of Christ will be a worldwide kingdom not a single earthly nation.

6 A kingdom in which the weak are strong

The very image of the sheep protected in a sheepfold and guarded by a shepherd against the wolves or against thieves, suggests weakness and vulnerability. A flock of sheep survives by the strength of their shepherd. They themselves are weak and lowly —a fitting picture for us who follow Jesus. Yet though we have no strength of our own, we are made strong in Christ and the Father. "He is greater than all, and no one is able to snatch [the sheep] out of the Father’s hand."

7 God looks on the heart

The Jews were always plying Jesus with questions. Here we find them doing it again. "Tell us plainly —are you the Christ?". They were not genuine enquirers, but were trying to trap Jesus. Jesus said, "I told you, and you do not believe." That is what it comes down to in the end.

It’s not what recognition and status you have among men, but what recognition and status you have with God. Does he know you? God does not know people according to their earthly status. He knows them according to their hearts. And that simply means that he knows you only if you have in your heart a true faith in his Son. There is no reason at all why you cannot have such faith. Make him your Shepherd, hear his voice and follow him..