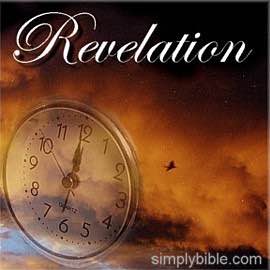 We now resume our verse-by-verse study. we consider the visions John saw when the Lamb opens the 5th and 6th seals of the book.

There are three visions, each portraying the Christian or gospel age and the day of God’s wrath at the end of the age. In this lesson, we will look at two of these visions.

In our next lesson, we will look at the third vision (chapter 7) about the multitude saved from wrath.

1 Souls Under the Altar

The altar When the 5th seal is broken, John looks "underneath the altar" (Revelation 6:9).

This is the first time the altar is mentioned by John, but we would have expected it because Jesus, in his letter to Philadelphia mentions "the temple of my God" (Revelation 3:12).

The heavenly altar represents the sacrifice of Christ. Significantly, underneath the altar, that is to say covered by it, are the souls of those who themselves had made the supreme sacrifice, having been "slain" because they preached the gospel (Revelation 6:9).

There are two most important principles of the gospel symbolized here...

Even a martyr for Christ needs to be covered by the blood of Christ. The souls underneath the altar symbolize the grace of God in giving up his only begotten Son to become "the Lamb of God who takes away the sin of the world" (John 1:29)

A salient fact about these robes is that the wearers have "washed their robes and made them white in the blood of the Lamb" (Revelation 7:9,13-14). Without Jesus, our robes (our righteousness) would be "like filthy rags" (Isaiah 64:6).

Our "robes" would be stained scarlet and crimson with sin. However the blood of Jesus has wondrously washed them as white as wool or snow (Isaiah 1:18). How thankful we must be that we are given white robes, that we are forgiven by the grace of God.

2 Time Until the End

The answer is given in the next verse. It will be "a little while longer" (Revelation 6:11). These souls are not on earth, so they are not subject to time. Rather they are now in timelessness where "one day is like a thousand years and a thousand years like one day" (2Peter 3:8-9).

However, when you think about it, even souls on earth do not experience the millennia of the entire gospel age —so far about 2000 years. As discussed in other lessons, we all experience only "a little while" on earth, namely our own short life span (James 4:14).

Judging and avenging The souls underneath the altar were expecting God to judge and avenge those who had opposed and killed his people (Revelation 6:10).

Were those souls wrong? Does a God of love get angry and kill his enemies? The answer is yes, after he has been longsuffering and patient for a time, the day will come when his wrath will be poured out and men will know the vengeance of God (2Thessalonians 1:7-10). In fact, the wrath and revenge of God is what the next vision is all about...

3The Day of Wrath

Great earthquake The description of this earthquake, which even shook the stars from the sky, represents the destruction of the heavens and earth that will happen on the day of wrath (cf 2Peter 3:9-13).

The earthquake also represents the supreme authority of God and Christ "from whom the earth and heaven fled away" (Revelation 20:11).

The kings "The kings of the earth" (Revelation 6:15) do not escape the wrath of God. You will recall that the rule on earth of kings and lords was represented by the first horse when the first seal was opened (Revelation 6:1-2).

Their power will mean nothing on the day of God’s wrath. Even kings flee when the "King of kings and Lord of lords" shakes the earth (Revelation 19:11-15).

Hide us Those who were unprepared for the day of wrath "cried to the mountains and rocks, 'Fall on us and hide us!'" (Revelation 6:15-16).

This cry is sadly futile, because "every mountain and island were moved out of their place" (Revelation 6:14). There is no place impregnable to almighty God.

Wrath You will recall that the souls underneath the altar were expecting the wrath of God to avenge the blood of the martyrs, and we asked whether God would do that? In this lesson we have made strong emphasis upon the grace of God. But we cannot ignore the emphasis in these visions on the wrath of God.

In Revelation, as in the rest of scripture, we are told of a God of grace who saves, and a God who gets angry and destroys. These are not two different Gods, but one. He is a God to be both loved and feared. This is not a popular doctrine today.

The gospel, however, clearly shows us both "the kindness and severity of God" (Romans 11:22). The visions of the 5th and 6th seals certainly do.