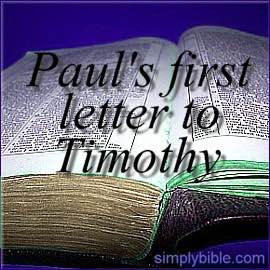 Verse by verse study of Paul’s first letter to Timothy. In this lesson we examine chapter 3 verses 14-16, looking at Paul’s reasons for writing to Timothy.

Paul explains to Timothy why he found it necessary to write.

1 To Make Up For Paul’s Absence

Paul wishes to provide Timothy with an adequate substitute for personal face-to-face teaching. Paul hopes to see Timothy in person shortly, but in case that was not possible Paul wants Timothy to have the necessary instruction for problems he may face in Paul’s absence.

You will note that the written word (scripture) was able to inform Timothy just as well as though Paul were speaking to him in person. Although Timothy might miss Paul’s company, he did not lack Paul’s knowledge. Paul’s writings are able to instruct as well as Paul’s lips, tongue, and voice.

God used scripture to preserve the teachings of the first century apostles and prophets for the twenty first century. This is by no means a second-best method. It more than makes up for the absence of the inspired teachers.

The truth supports the church, and the church must support the truth rather than the whimsy of popular fashion.

Failure of Faith in Scripture

Confusion among “Christian” groups and movements today is largely due to laying aside the scriptures in favour of a “God spoke to me” claim and even preferring God’s personal direct message to the message in the scriptures. (Notice, God could easily have spoken to Timothy directly and personally; but instead he spoke to Timothy through a letter from the apostle Paul.)

When there is confusion and disagreement, people point to the scriptures as the problem rather than the solution. They turn to personal messages and inspirations from God. This ends all argument: “God spoke to me personally and told me this, so who are you to disagree with what God laid on my heart?”

That slams shut not only the door to investigative debate, but also the door of opportunity to learn the way of the Lord more perfectly. Worse, these new messages and revelations seem to be saying different things to different people, creating conflict and confusion. The culprit is not the scriptures, God’s written word of old, but the spurious claim that “God speaks to me personally”.

3 To Remind of the Common Confession

Paul wants to remind Timothy of the church's common confession about which there should be no argument or controversy. This is not a creed in the modern sense. However it is a useful summary of the points of doctrine which were of concern in Timothy's situation.

These points, which our next lesson will notice, relate to the false teachings which Paul goes on to mention in chapter four.