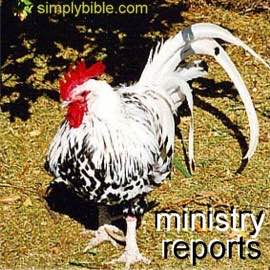 This page reports my voluntary ministry activities April to June 2012 —for the information of those who take a special interest in my work.

Dear Brethren... This report covers the second quarter of 2012.

During April, May and June, I presented 16 Sunday lessons in Bundaberg. These included nine sermons on various subjects, and seven Bible class studies in the second, third, and fourth chapters of Acts. We were missing from Bundaberg the first two Sundays in April, preaching a mission in Gladstone.

As mentioned in my last report, I am continuing to prepare verse by verse studies in the book of Acts. Last quarter I completed the first nine chapters. This quarter, saw four more chapters completed. So we are now up to chapter 14, about half way through Acts. These lessons are online on simplybible.com and I'm teaching the earlier lessons in Sunday Bible class.

Old site archived. I archived the site at its old home and made all of its links point to the new home at www.simplybible.com —so that now changes and additions will be made only to the new server.

“Follow us on facebook.” I got the Facebook page facebook.com/simplybible up and running, and put a widget on all the simplybible.com pages so that people can "like simplybible". We got just on 100 likes in the quarter.

Behind the Scenes There is always some work to be done to optimise a large website’s performance. I improved over 100 page titles and descriptions where Google found them wanting. I also cleaned up a few functions in my programming that had got out of date.

Visitors to site. The site received 2900 page views per day on average. For some reason April went sky high, getting over 112,000 page views for the month. However, in April, Google changed its method of indexing, and this seemed to cause a downdraft: the month of May got 85,000 and June 67,000. So we have to stay humble. Visitors have been coming mainly from where you would expect: Mainly USA, Philippines, Australia, Britian, India, Canada, South Africa. But there are significant (though much smaller) visitor numbers in places like Singapore, Nigeria, Japan, Malaysia, and the Netherlands. For example, right now as I write there are two visitors on the site: one from Adelaide Australia, and one from Singapore. Oh, and other visitors have just come on from Sydney, Cebu, and the USA.

At the beginning of April I preached in a mission at Gladstone Queensland. I spoke four times on the theme of salvation by faith, including the last title, “Busting the Faith Only Myth”. There were a couple of visitors from the community, and some of the folk from the church in Rockhampton visited. The church at Gladstone consisted of three families, one Australian, one American, and one from the Philippines. We were given much hospitality and enjoyed ourselves, until my wife had a collapse causing her to fall unconscious face first onto hard concrete. She had to go to hospital in an ambulance. She badly injured her face and body, and is even now, after three months, still recovering. We had to stay some extra days in Gladstone, and I preached again on the second Sunday.

Again I say a big thank you to the people who have assisted me in my work. Without you, I could not do it.

Love and best wishes in Jesus,