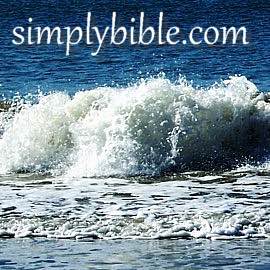 This index guides you to a selection of our video clips. These videos are Bible lessons of around ten minutes or less. They are excerpts from the Australian Video Ministry archive (circa 1980). You'll find them a bit scratchy and worn, but you still may like them. The buttons below will take you to YouTube and open the video.

What Bothers Me
VIDEO

Jesus built his one true church on a rock 2000 years ago. Others have built many churches since. Which church should we belong to? His alone, or one of theirs?

Jesus prayed in the garden of Gethsemane that his disciples might all be one. But they aren't, as this little town demonstrates.

There's only one true religion, not many. A lot of costly books were burned to make that very statement.

Many think that all religions that include God are valid. But the Christian scriptures insist that only one religion is true.

Love With the Wrong Object
VIDEO

Why are there all these religions? It may seem strange, but the problem boils down to love. Not that people are unloving. But the object of their love is wrong.

Love at the Wrong Temperature
VIDEO

The Love You Must Have
VIDEO

When people refuse to love the truth, they leave themselves no alternative but to believe the lie. But a love of the truth protects us from the lie and helps us find the true church.

A truly undenominational church would add nothing to their teaching and practice but what God has given. Therefore the would have nothing by which to divide God’s people.

Called By a New Name
VIDEO

It was prophesied that Christians would "be called by a new name, which the mouth of the Lord shall designate" (Isaiah 62:2). Very few denominations claim that their name fulfills this prophecy.

No Creed But Christ
VIDEO

No denominational creed is “the seed of the kingdom” nor “the sword of the Spirit”. Creeds divide those who confess Jesus Christ.

Some people think that any religion is valid, provided that it's a "Christian" religion. Jesus, however started one Christian religion, not many.

It was prophesied that Christ's church would begin in Jerusalem. Any authentic church in the 21st century must replicate the undenominational pattern set by Christ when he established the church in Jerusalem and other places in the 1st century.

No Divisions Among You
VIDEO

The true church of Christ should exist locally and visibly and there should be no divisions. Stop promoting denominations.

—You may like to visit this simplybible YouTube channel. It contains several excerpts (as listed above on this page) from the archived Australian Video Ministry circa 1980. Tap the title above, next to the arrow, to go to that channel.

—www.youtube.com/simplybible is the main YouTube channel for simplybible.com which you may like to visit. This channel by Ron Graham has a variety of videos, including half‑hour lessons, and several short Bible slide presentations with voice over. Tap the title above, next to the arrow, to go to that channel.