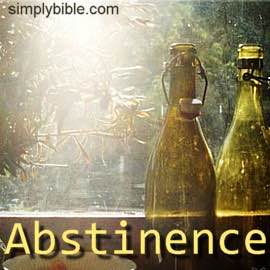 Abstinence and Drunkeness
—The trouble with moderation

The law of Christ specifically states, "Do not get drunk..." (Ephesians 5:18). To get drunk is to disobey Christ, and those who disobey Christ cannot claim to be true followers of him. To any Christian who gets drunk, Jesus would ask, "Why do you call me 'Lord, Lord' and do not do what I say?" (Luke 6:46-49).

1 Alcohol Is a Danger to You

Obviously, in order to get drunk, one has to consume an inebriating substance. It is consumption of alcoholic drink that causes drunkeness. '"Those who linger long over wine... see strange things... utter perverse things" (Prov 23:29-35).

For the Christian, who is to exercise "all discernment" (Philippians 1:9-10), the distinction is critical. You can't sin by drinking orange juice, but you can sin by drinking beer.

Worse still, drunkeness can lead to other sins such as fornication and violence. Sin incurs the wrath of God. "Do not let anybody deceive you with empty words... the wrath of God comes upon the children of disobedience" (Ephesians 5:1-19). Is it any wonder that so many discerning Christians have chosen abstinence as the safe course?

2 Alcohol is a Danger To Others

Suppose you drink without getting drunk? Is there anything wrong with that? You may consider yourself able to exercise such moderation that you always remain sober. Therefore, you feel it is safe for you to drink.

If you are not deceiving yourself, and you really are able to consume alcohol yet never get drunk, then I suppose you have to be commended for never getting drunk. This does not mean, however, that you are to be commended for drinking alcohol, because there is the danger to others to be considered...

Around people like that, "It is good not to... drink wine" (Romans 14:21) and by not drinking wine (or any other alcoholic drink) you are "bearing the weaknesses of those without strength" (Romans 15:1).

The Trouble with Moderation

That is to say, let it not become a stumbling block to others. The best way to do this is to forgo it, and practice total abstinence instead. Paul goes on to say, "It is good not to... drink wine" (Romans 14:21). This good is better than your good.

Many people today have a problem with alcoholic drink and drunkeness. They are not able to drink without committing the sin of drunkeness. If the one who drinks without getting drunk, leads one to drink who lacks self control and becomes drunk, then a serious offence has occurred, and it is the fault of the one who drank without getting drunk, but did not have regard for the weakness of the other.

Remember too, that even though the other person does not get drunk, he or she can stumble by acting against conscience. We dealt with that matter in our previous lesson, "Abstinence and Conscience".

Abstinence from alcoholic drinks is called for today wherever drunkeness is a problem in the community. The onus is on you to fully protect others from their own weaknesses. You are responsible to ensure that you do not encourage others to drink, lest you lead them to damnation (Romans 14:13-23).

For example, you are to bring up your children "in the nurture and admonition of the Lord" (Ephesians 6:4). Do you do that by teaching them to drink alcohol? How do you know for certain that they will not have a weakness that will cause them to have an alcohol problem?

In most circumstances it is impossible to be certain you are not causing offense to others by your drinking. It is safer and wiser to abstain, and to drink something you like less, but you know won't endanger a soul.