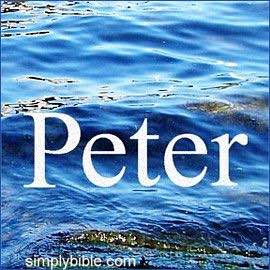 This is another lesson from 2nd Peter chapter 1. Previously in the first half of chapter one, we looked at "Christian Growth".

Now, in the lesson below, we look again at some of the same verses. We focus on the excellence, glory, and perfection of what God has granted to us, and how we must not allow God’s gift to be diluted or polluted by man.

Peter did not recognise "other faiths" as having any value, only the same faith as his.

Peter tells all his readers that the same divine power has granted them "precious and magnificent promises and made them "partakers of the divine nature" (2Peter 1:2-4).

Jesus Christ our Lord called us to this faith by "his divine power", through "the true knowledge", and unto "his own glory and excellence" (2Peter 1:3). How much more precious and magnificent a faith could we be given?

Yet many people, instead of desiring this faith and no other, are more comfortable receiving various faiths and recognising them all as precious.

They mistakenly believe that we can be "fellowshippers of the divine nature" by something other than what "His divine power has granted" (2Peter 1:3-4).

Divine power has granted only one true faith by which we may be "fellowshippers in the divine nature".

We must be satisfied with nothing less than what is "precious and magnificent" (2Peter 1:4). So we must pan patiently and earnestly for the gold, the precious faith from Christ (1Peter 1:7), and throw out the worthless gravel of faiths invented by men.

2 God’s Own Glory and Excellence

Peter says that our Lord "called us to his own glory and excellence" and later says that "entrace into the eternal kingdom of our Lord and Saviour Jesus Christ will be abundantly supplied to you" (2Peter 1:3,11).

This is truly "precious and magnificent" because it is not anything second best. God calls us to "his own glory and excellence" and nothing less.

Those who are happy to receive a faith less than the precious faith that came through Christ's divine power, must be happy to hope for something less than an "entrance into the eternal kingdom" where we will dwell in the magnificence of God’s "own glory and excellence".

Indeed many believe in little more than a better life on earth, instead of a perfect life in heaven where God dwells.

Peter, however, is exhorting us to reach for "the greatest". Another translation of "magnificent" is "the greatest" (2Peter 1:4).

So we must receive only the greatest. God grants nothing less. He grants only the best, and nothing less will do.

3 All Things Not Some

To sum up what we have been observing in this lesson, take Peter’s phrase "all things pertaining to life and godliness" (2Peter 1:3).

Should we be satisfied with "some things pertaining to life and godliness" rather than Peter’s "all things"?

There is a habit among professing Christians to divide the things of God into essentials and non-essentials.

Therefore, people say, we must tolerate in others the presence or the absence of these non-essential things.

You cannot read the first chapter of 2nd Peter and get that idea.

Later in the chapter Peter speaks of "these things" which he is striving to help the Christians "keep in mind" (2Peter 1:15).

There are no other things, only "these things" which God’s divine power has granted. They are the "all things" which he spoke of earlier (2Peter 1:3).

There are no essentials and non-essentials. There are just "all things pertaining to life and godliness" —the indivisible whole of what God granted.

Whilst "All things" were granted, no subtraction from them, or addition to them, ever was.

So we have fellowship with one another and with God in nothing but the best —the one precious faith which God by his power has granted to all people.