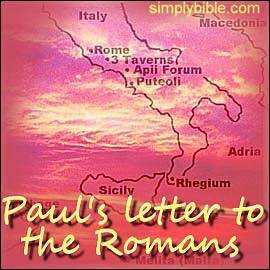 Law, Sin, and Grace
—A study in Romans

The aim of this series of lessons, is to help you think through the book of Romans and get an insight into the thought and doctrine of Paul. Peter comments that some of Paul’s wisdom and teaching is hard to understand some people twist it to their own destruction (2Peter 3:15-16). In these lessons we try to represent Paul’s doctrine accurately and clearly.

The letter to the Romans is about solving the problem of sin. But what is sin? John believes that "sin is lawlessness" (1John 3:4). Paul understands sin in exactly the same way. However in Paul’s mind there are two kinds of lawlessness...

In the garden of Eden, as far as I know, there was no law about talking to the serpent, so Eve committed no sin by doing that. She might have done better by telling him to go away as Jesus did (Matthew 4:10), nevertheless she acted lawfully in speaking with him.

There was, on the other hand, a law forbidding the eating of fruit on a certain tree. Eve and her husband disregarded and repudiated that law and behaved in a manner that was lawless rather than lawful. That was sin, and that is Paul’s concept of sin. One commits sin when one has a law from God and disobeys it instead of fulfilling it.

2 God condemns all who break his law

In Romans, Paul shows that sin (the breaking of God's law) results in condemnation and death, and brings one under the wrath of God. "For the wrath of God is revealed from heaven against all ungodliness and righteousness... because of your stubborn and unrepentant heart you are storing up wrath for yourself in the day of wrath..." (Romans 1:18, 2:5, ).

Furthermore, we find that all the world comes under sin and condemnation, because all have broken God's law. "Both Jews and Greeks are all under sin... all have sinned and fall short of the glory of God... death spread to all men because all sinned" (Romans 3:9,23, 5:12).

The question is, how can we now escape the wrath of God? How can we become justified (right with God) rather than condemned? This is what Paul’s letter to Romans is all about. Paul reveals the solution to sin: it is God's grace...

The only way the one who has broken God's law can escape God's wrath, is to come under God's grace...

This message of Paul is widely misunderstood. Some people almost seem to receive God's grace by repudiating his law. They feel that God's law is at odds with God's grace. Paul however sees law and grace combining, not conflicting.

Notice that Paul says, "The law of the Spirit of life in Christ Jesus has set you free from the law of sin and death" (Romans 8:1). Paul did not say, that grace has set us free, rather he said that law has set us free!

Paul clearly believed, of course, that grace has set us free, yet he also clearly understood that God set us free by grace through a certain law, namely God’s "law of faith" the gospel (Romans 3:27, 1:16-17).

Consequently Paul’s ministry was dedicated to achieving "the obedience of faith". This is obedience to Christ’s law of faith, the gospel (Romans 1:5,16, 16:26).