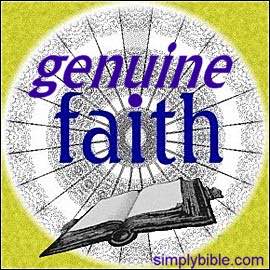 Two Mistakes About Works
—The Idea of Merit Points

There are two mistaken ideas about how God regards the good works that a person does in good faith and in the sight of God. This lesson is about those two mistakes.

The first mistaken idea is that there is a sort of Heavenly accounting system where, if you do enough good works you will merit a place in heaven on the basis that your good deeds cover and compensate for your sins. That is just not true. Here's why...

The way in which works don't have merit

"All have sinned and fall short of the glory of God" and no amount of good and law-abiding works can compensate for sin and broken law.

James points out that if you break one of God’s laws and break it only once, you are still a law breaker, even though you might have kept every other law (James 2:10-11).

David is commended in the Bible as a man who used to "follow God fully" (1Kings 11:6). If anyone had merit points stored up, then the good king David did. Yet when he sinned with Bathsheba, he was condemned. His good works did not serve to cover his sins (2Samuel 12:9-10).

Yet for all his righteousness he was still not saved, because the angel commanded him, "Send for Simon Peter who will tell you words whereby you and all your household will be saved" (Acts 11:13-14).

We even follow this principle in everyday life. Who would say that a man who does a hundred gallant and loving deeds for his wife has stored up enough merit to justify spending a night with another woman?

Or who would think that obeying twenty stop signs gives you the right to drive through the next one without stopping? Perhaps some people think like that, but not many, and most people would think them mistaken.

Paul claims that in keeping the law of Moses he was "blameless" yet he could see no merit points awarded to him on that basis, "not having a righteousness of my own derived from the Law, but a righteousness which comes from God on the basis of faith in Christ" (Philippians 3:6,9).

It was because there is no merit points system with God, that he sent his Son to die on the cross. "He himself is the propitiation (atoning sacrifice) for our sins, and not for ours only, but also for those of the whole world" (1John 2:2). We cannot be our own propitiation by anything we do. Only Jesus, by what he did, can atone for our sins.

Paul teaches that in order to merit our salvation, or be counted worthy, we rely upon the righteousness of Jesus who became the perfect sacrifice for us, and rose from the dead to empower us for eternal life (Philippians 3:9-11). Yet he has already exhorted us, "Work out your own salvation with fear and trembling" (Philippians 2:12).

We should expect God to require good works, and having required them to value them when we do them. We should not expect him to accept them as an atonement for our sins, for he accepts only what Christ did as sufficient for atonement.

Thus we avoid the two great mistakes people make about good works, and instead believe in the value and necessity of obedience and service to God without thinking we can be saved by that alone without faith in Christ.

These examples show us that there is no merit points system by which one can be saved on the basis that a person’s good works give that person the right to sin with impunity. Having reached that conclusion, we must not make the second mistake which is to think that our good works have no value in God’s sight. So now we will think about this other side of the matter...

The scriptures lay two simple facts side by side. On one hand, good works by themselves cannot merit eternal life. On the other hand, those who lack good works cannot have eternal life. There is nothing contradictory about this.

The second mistaken idea holds that God gives no credit for good works and they are worthless to him. This idea says that, when it comes to granting forgiveness of sins and a place in heaven, a person’s good works have no merit in God’s sight —consequently, a person can do nothing toward gaining eternal life. This is one of the worst ideas to creep into Christian doctrine. Here's why...

The way in which works do have merit

Suppose I said to you, "Our sins are more precious to God than our good works". Could you accept that? My reasoning might run like this: "God can forgive our sins, so they make an opportunity for him to exercise his grace through his Son, but God can do nothing with our righteousness, because it is like filthy rags".

My reasoning would be twisted, yet it would be correct if our good deeds really were worthless to God.

When the scripture says, "All our righteous deeds are like filthy rags" (Isaiah 64:6) it is speaking of their inability to cover up our iniquities. It is showing the arrogance and stupidity of thinking that righteous deeds can clothe our evil deeds. It does not mean that our righteousness is repugnant to God. It may be worthless as an atoning sacrifice, but that does not mean it is worthless in every way.

Imagine a husband says to his wife, "Darling I have had an affair; here’s a diamond necklace to make up for it". Should he be surprised if she spurns the diamond necklace? That does not mean that she thinks the necklace is worthless. She just doesn't see it as an appropriate means of putting right her husband’s sin. Nor does God see our offering him a string of good deeds as being an appropriate way of putting right our sins.

Jesus in his messages to Ephesus and Thyatira said, "I know your deeds... but I have this against you..." (Revelation 2:2-4,19-20). He valued their good deeds, and he held their sins against them, both at the same time. Their good deeds could not cover their faults, nevertheless their good deeds were not worthless.

Take the example of Cornelius again. He was a "just" or righteous and upright man (Acts 10:22). Not only did those who knew him think so, but God thought so too. The Holy Spirit described Cornelius as "a devout man and one who feared God with all his household, who gave alms generously to the people, and prayed to God always" (Acts 10:2).

When the angel appeared to Cornelius, the angel said, "Cornelius! Your prayers and alms have come up for a memorial before God!" (Acts 10:3-4). After God has said all that, we can hardly believe that God saw no merit in, and was not influenced by, the righteousness of Cornelius.

The woman who was "a sinner", who washed the feet of Christ with her tears and anointed them with perfume, shows us that sinners can come to Christ and receive forgiveness and salvation (Luke 7:36-50).

Simon the Pharisee was somewhat disgusted at this display. He was not so much a righteous man as a self-righteous man. He did not demonstrate any belief that he needed Christ. Using the parable of the two debtors, Jesus showed Simon that he didn't love God as much as he should, and therefore broke the first and foremost commandment, "Love the Lord your God with all your heart".

The sinful woman, however, was ministering to Christ in a way Christ deeply appreciated. It was her works, demonstrating her love and faith, that led Christ to save her from her sins. Whilst the forgiveness she received from Christ was much more than her actions merited, it is also true that without those actions she would not have received forgiveness.

If Christ wants works, who are we to say, "No, Lord, You have done all the good deeds —mine are worthless".

I will leave you with this excellent statement from Paul...

¶“11For the grace of God has appeared, bringing salvation for all people. 12Grace teaches us to renounce ungodliness and worldly passions, and to live a sensible, upright, and godly life in the present age. 13We must be looking for the blessed hope and appearing of the glory of our great God and Saviour, Christ Jesus 14He gave himself for us, so that he could redeem us from every lawless deed and purify for himself a people for his own possession —a people zealous for good deeds” (Titus 2:11-14).