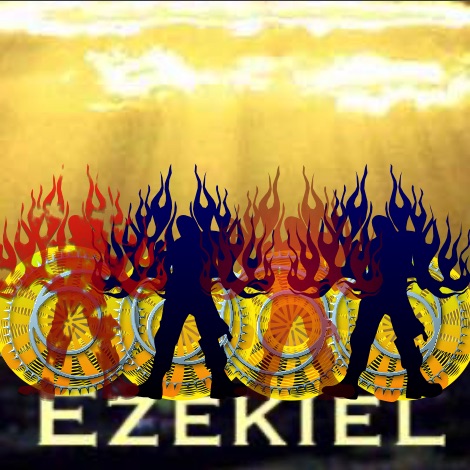 On this page, chapters 43, 44, and 45 of Ezekiel are outlined and analysed. These chapters are about Ezekiel's vision of an ideal temple and its laws.

In Ezekiel's time the temple at Jerusalem was reduced to ruins by the enemies of Israel. However, Ezekiel saw visions of a new temple which the glory of God filled.

According to the design, measurements, and laws, which the vision revealed, it seems that God intended that temple to be built by the Israelites for sacrifices. Ezekiel was told by God to describe to the Israelites all its pattern and ordinances (Ezekiel 43:10-12:).

The failure of the Israelites to build the new temple according to the pattern is their failure, not God’s. Ezekiel’s vision does not fail. It acomplished its purpose which was to show Israel the temple that God designed and which he wanted the Israelites to build and use. This pattern from God retains absolute integrity whatever man fails to do.

The prophetic vision is a pattern not a prediction. Prophecy and vision is not always to predict the future, but often to convey instruction from God.

Laws About the Altar

Laws for the Zadok priests

Division of the City Land

An Oracle to the Princes (governors)

3 A Temple for the Messiah’s Kingdom?(Ezekiel 1)

This temple in Ezekiel was not intended for the Messiah's kingdom, because the Messiah himself made a sacrifice to end all sacrifices and he exercises his high priesthood in heaven itself, not in a temple on earth (Hebrews 9:23-28).

The only earthly temple Christ builds is his church whose members, "like living stones, are being built into a spiritual house to be a holy priesthood, offering spiritual sacrifices acceptable to God through Jesus Christ" (1 Peter 2:5).

Peter makes the earthly temple a type or symbol of the "spiritual house" comprised of Christ's called out people (his church). This church is forseen in Ezekiel's vision. However it would be fanciful to say that every measurement and ordinance has some spiritual meaning regarding the church.

This leads us to believe that the temple of wood and stone, described by Ezekiel, should have been built according to the pattern. The fact that a lesser temple was built is just another example of the house of Israel in general falling short of God’s ideal.