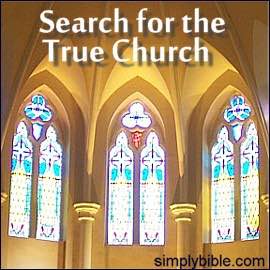 The Visible Church
—Refuting the idea of an invisible church

In other lessons we briefly address the notion that the true church is invisible. Now we take up this subject in more detail.

Let us begin with three things we all know...

So we know that the Head of the true church is in heaven and his church is a spiritual kingdom. In the minds of many people this makes Christ the invisible head of an invisible church.

That is the main idea we are discussing in this lesson. We will talk about the "invisible church" in a moment, but since that idea rests on the point that Christ the Head is invisible, let us think first about that.

By definition an image cannot be invisible. Paul himself could not believe that Christ is invisible, because he claimed, "Last of all he was seen of me..." (1Corinthians 13:1-8). Paul saw Christ after Christ had ascended to heaven.

We remember also that the heavens were opened up for Stephen who "gazed intently into heaven and saw the glory of God and Jesus standing at the right hand of God" (Acts 7:55).

When my wife goes out the back door, I cannot see her. But that hardly means I have an invisible wife, does it? Indeed, if I go and look through the window, I can see her and prove that she is perfectly visible.

Now I know that I have done a bit of hair splitting, but that does not mean what I have said is wrong or silly. Normally I would not make such a fine point, but in this case we have an entire false concept of the church supported by nothing better than the loose assertion that the Head of the true church is "invisible".

The church is certainly a spiritual body, and we tend to think of what is spiritual as invisible.

The Church is People

There is One Church

On the other hand, people think that Christians attach themselves to a local church of their choice that has been established and headed by men other than Christ.

Thus they think of the first church as "the invisible church" and the second as the visible church. Of course not everyone who thinks this way thinks clearly about it, and not everyone has thought the matter through.

This is the principle held by undenominational churches of Christ and actually put into practice by them.

Example: The Church at the Beginning

The church founded in Jerusalem circa AD33 was a visible and local church. It was established and headed by Christ. God was adding to this church those who were being saved (Acts 2:47 kjv).

The rest of Acts chapter 2 shows clearly that this local and visible church was established by none other than Christ in fulfilment of his promise to build his church, the kingdom that he had said would come (Matthew 16:18-19).

This first church is proof that a local and visible church can be the true church. The first one was.

The New Testament consists mostly of letters written to these various churches. Except that they were in different localities, these churches were like the church at Jerusalem.

The idea of an "invisible church" does not match the picture the New Testament provides of the church at the beginning. Christ's church, as we have seen above, was a visible church. You could see it in Jerusalem, in Antioch, in Ephesus, in Rome, and in dozens of other places across the world.

There is no evidence whatsoever that this was a temporary thing. The church of Christ would go on being visible wherever it was established by the preaching of his word.

Ephesus as Another Example

When Paul worked for three years at Ephesus, he believed he could see the true church of Christ. He told the elders at Ephesus to "shepherd the church of God which he purchased with his own blood" (Acts 20:28).

They shepherded the local church at Ephesus. That, in Paul's view, was the blood-bought church of Christ, not something else. This clear proof that Paul believed the local and visible church to be Christ's true church.

Seeing Only a Part of the Whole

Now it is true that one cannot see all the church at once. One can only see a local part of the church in any given place. This fact is hardly a mystery or a problem, since no visible object can be seen all at once. Looking at any visible object, you will not see it in its entirety, yet it is nevertheless a visible object.

Suppose you look through a door into a room. You will not see the room as it was in the past, or as it might be in years to come. Nor will you see all that exists of the room at present. You will see a particular part of the room at a particular moment of its existence. Nevertheless you see the real room, not something else. And the room is visible not invisible.

In the same way, looking at a local church, you will not see the whole church of Christ gathered from every time and place, the "general assembly and church of the firstborn" (Hebrews 12:22-23).

You can see that only with the eye of faith. Nevertheless, although you see only a part of the whole, what you see is the true church, not something else, and because you see it, it is not invisible.

We said earlier, that the church is people, and since people are visible the church is visible. Yet many people believe that saints, the truly sanctified believers, who make up the membership of the true church, are not visible.

The idea is that we mortals are so limited in our knowledge and perceptions that we cannot possibly recognise the true saints and distinguish them from pretenders. After all, we cannot look into people's hearts, can we? To be able to recognise the people of the true church, we would have to have the sight and mind of God.

There are three things we can say about this...

There were, in the first churches, "false apostles, deceitful workers, disguising themselves as apostles of Christ" (2Corinthians 11:13). This did not mean that the churches of Christ ceased to be true churches just because some impostors had come in among them.

He says that "their folly will be obvious to all". We recall that Jesus said of the false, "By their fruits you will know them (Matthew 7:15-20). We are told often enough to beware of them. How could we do that if we cannot know who they are?.

Thirdly, we can recognise genuine Christian folk who show "the fruits of the Spirit" (Galatians 5:22-24) and do not show the "deeds of the flesh" (Galatians 5:19-21), Is it not foolishness to regard such people as possible pretenders?

This notion undermines respect for the local church as the genuine and true church of Christ!

In this lesson we see that it is incorrect to speak of "the invisible church". It is error to say that you cannot see, with your physical eyes, the true church of Christ and the saints who make up its membership.

We acknowledge of course, that since the true church of Christ is all around the world and reaches even into heaven, no mortal can see it all at once. But that does not make it invisible, for no visible object can be seen all at once by one person.

Since the word of Christ has not changed, it can still do the same today in any place.And when it does, the true church is visible in that place.