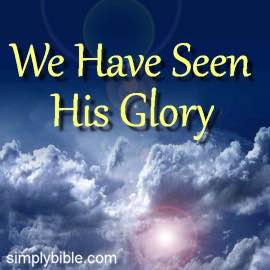 Jesus is God
—The G in GLORY

The POWER of Jesus as the GOD who created all things and for whom all things exist.

1 The Word was God

We will worry about the term "Word" when we get to the R in GLORY, and consider Jesus as the Revealer and explainer of God.

The Very Form of God

Paul says that Jesus, "being God in very nature (or form) , did not consider that he should cling to equality with God, but made himself... in human likeness, being found in appearance as a man" (Philippians 2:6-8) .

Paul’s point is that Jesus did not esteem this equality with God something to hold onto. He who was with God and was God, humbled himself, and became one of us, divesting himself of his divine form, and taking upon him the form of flesh and blood and bone.

Let us now look at the second thing which John says. Really, it's the same thing only in different words.

John makes it clear that all things came into being through Jesus. To make sure we understand, John says that nothing that has ever been made was made without Jesus (John 1:3) . J.B. Phillips makes a tidy job of translating this verse: "All creation took place through him, and none took place without him."

Down through the centuries, people have argued about whether Jesus was the first creature. By "creature" they mean something created, in particular a created being. It seems clear that if no creature was created without him (as John says) , and all creatures were created through him (as Paul says) , then he cannot himself be a creature. If he exists, but was never created, then he always existed. Since only God has always existed, then we can see why John says that he "was God".

There has always been the temptation to say that Jesus created all things except himself, or that Jesus created all other things. The Jehovah's Witnesses' Bible for example, inserts the word "other" into Paul's statement, and makes John say, "The Word was a god". Without these interpolations, the scriptures show Jesus Christ to be the Creator of all things, and to be himself eternal.

Let us be satisfied to accept the divine nature of Jesus. Some things are hard to fully understand, but not hard to believe. This is one of them.

Let us accept Jesus as divine Creator, and say with Paul, "He is before all things and in him all things cohere" (Colossians 1:17).